A. Sutherland - AncientPages.com -  Cynane was born in 357/358 BC and died in 320 BC, only 34 years old. She came from a tradition of Illyrian female warriors who led armies in battle.

Today, our main source for Cynane is the work "Stratagems of War" written by a 2nd-century Macedonian historian, Polyaenus. Although his work is not a primary one but based on some earlier sources, there is no reason to doubt the existence of Philip II's daughter Cynane and her involvement in military encounters.

She was Macedonian princess, the half-sister of the celebrated Alexander the Great. Her father was the Macedonian king Philip II and her mother, Audata (ruled c. 359 – 336 BC), a Illyrian princess and later a Macedonian queen and wife of Philip II of Macedon.

Cynane was half-sister to Alexander the Great, and daughter of Philip II Macedonian. Image source

Audata who had all necessary military skills, herself, trained her daughter Cynane, in hunting, fighting, riding and traditional Illyrian struggle.

When she was twenty years old she was already a skilled military leader and commanded troops during the Macedonian expansion north in the Balkans. It is believed she fought on horseback like her Illyrian ancestors and she was accomplished in hand-to-hand-combat.

Polyaenus writes, "Cynane, the daughter of Philip was famous for her military knowledge: she conducted armies, and in the field charged at the head of them. In an engagement with the Illyrians, she with her own hand slew Caeria their queen; and with great slaughter defeated the Illyrian army…"

In 339 BC, her father gave Cynane in marriage to her cousin Amyntas IV, a former king of Macedonia, by whom she had a daughter Adea (Eurydice). When Amyntas IV died, Cynane was left a widow three years later, in 336 BC. The next year, Alexander promised Cynane’s hand to Langarus, king of the Agrianians, but the latter became ill and died before Cynane’s marriage with him, could take place.

In another version, Cynane refused Alexander’s arrangements to marry off her for a second time. Cynane continued unmarried and was busy to educate her daughter, Adea in martial exercises.

According to tradition in Illyria, noble women hunted, rode and fought alongside their male counterparts. 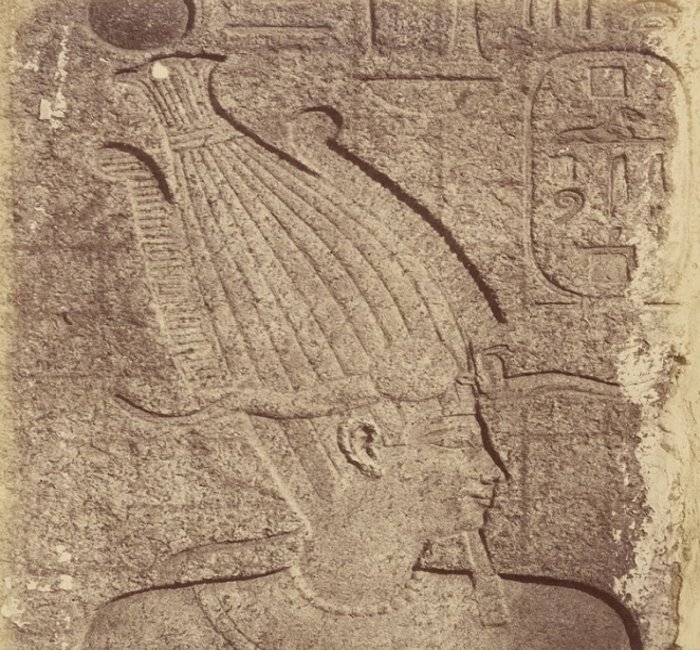 Philip III (half-brother of Cynane) as pharaoh on a relief in Karnak. Image source:Wikipedia

Cynane was taught the same military skills as those possessed by her half-brother, Alexander. As a widow, she participated actively in the dynastic disputes of the Macedonians after the death of her brother Alexander in 323 BC. Alexander’s untimely death left his empire without an obvious ruler. The only possible candidate for the throne was Cynane’s half-brother Philip III Arrhidaeus.

Even though he was intellectually disabled, Philip was elected the new king in 323 BC but with no actual power. He became nothing more than the puppet king of the regent Perdiccas (c. 355 BC – 321/320 BC), a general and Alexander's former right-hand man, who participated in Alexander's campaign against Achaemenid Persia.

Perdiccas wasn’t the only Macedonian commander who wanted to be the power behind the throne. There were also the other generals who decided to revolt against the regent and fight for control over Alexander's empire.

In this particular political situation, Cynane decided to make necessary arrangements for her daughter Eurydice to marry Philip.

“Unable to seize the throne for herself, she decided to arrange a sword-point wedding between her daughter and the puppet king Philip Arrhidaeus, who was Cynane’s half-brother…. Cynane mobilized her troops and headed toward the imperial capital at Babylon. Perdiccas sent an army, headed by one of Alexander’s generals, to stop her at the Macedonian border. She defeated him at the Strymon River, now the Struma, and crossed into Asia. Perdiccas sent a second army against her, led by his own brother, Alcetas, who grew up with Cynane. Perdiccas seems to have believed facing a childhood companion at the head of an opposing army would be enough to change Cynane’s mind. It didn’t…” (Toler P.D. Women Warriors)

Polyaenus narrates that Alcetas’ forces were impressed at the sight of Cynane on the battlefield. She was a prestigious figure because she was Philip’s II daughter, Alexander’s sister and a skilled warrior with many successes on the battlefield.

She was not afraid of Alcetas; she confronted him accusing for his lack of loyalty.

Alcetas killed her in front of his army while she was still talking to him. She did not finish her speech. The Macedonian army soldiers witnessed the murder committed by their own commander. They mutinied and forced Alcetas and Perdikkas to accept Eurydice’s marriage to Philip III.

The fact still remains that Cynane, only 34 years old, died on the battlefield and it happened while she was giving her speech and not fighting an enemy soldier.

Chugg A. The Death of Alexander the Great