Ellen Lloyd - AncientPages.com - Whether it is a ring, necklace, cup, stone or some other object, precious artifacts with supernatural abilities are often mentioned in myths and legends of our ancestors.

Syamantaka was a divine gem with magical abilities in Hindu mythology. This precious jewel could provide gold on daily basis. It was said that the land in possession of Syamantaka was protected from droughts, floods, earthquakes and famines.

Syamantaka, The Most Famous Jewel In Hindu Mythology

Syamantaka, the most famous jewel in Hindu mythology originally belonged to the Sun god who wore it around his neck. 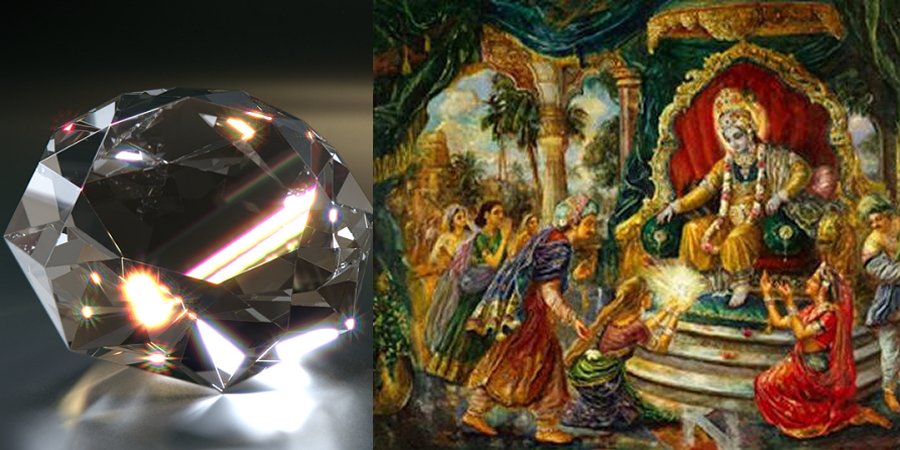 As the legend goes, Satrajit, a noble man from Dwarka who was a great a devotee of Surya, the Sun God decided he will perform a rigorous penance to propitiate the Sun God. He left all his possessions and went to live in the forest where he stayed for many years.

As Ahalya Gautam writes in the book Popular Upanishads Tales For All, one day “the Sun god appeared before him and made him visit his abode. Finally, the happy Lord also gave Satrajit his much renowned and fabled Syamantaka Mani (the gem). Satrajit wore that gem round his neck and returned to Dwarka. Owing to his wearing that gem his whole personality dazzled like the sun.” 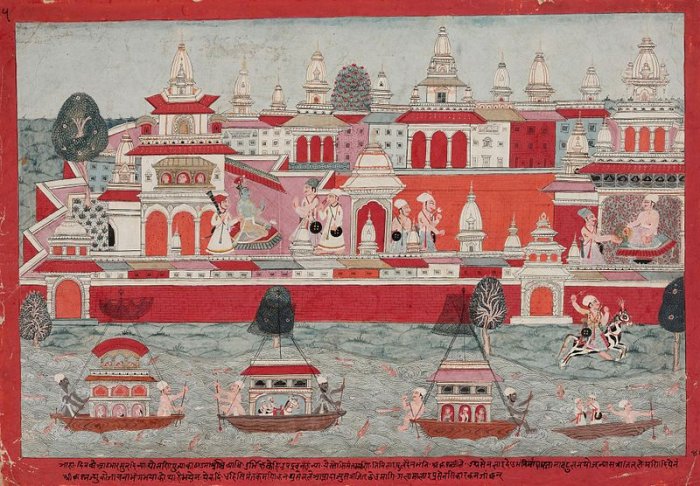 Satrajit and Prasena with the Symantaka Mani, an Illustration to the Bhagavata Purana Credit: Public Domain

An interesting part of the story concerns what the Sun God looked like after he removed the jewel from his neck. According to the legend, the Sun God was shining so brightly that Satrajit couldn’t see him clearly. He asked the deity to appear in less fiery shape. When the Sun God removed the Syamantaka jewel off his neck, Satrajit could see that the deity he worshiped was not very tall at all. The Sun God had dwarfish stature, with a body like burnished copper, and his eyes very slightly reddish eyes.

With the precious jewel hanging around his neck, Satrajit returned to his palace. Now he was also shining brightly, and the guards mistook him for the Sun God.

They quickly notified Lord Krishna that the Sun God had taken his place in Dwarka. When Lord Krishna learned about this he just smiled and said: “He is not the Sun god but only our brethren Satrajit. His body is appearing so sparkling because he is wearing the fabled gem Syamantaka. The gem creates this impression around the wearer’s personality.”

In his palace, Satrajit placed the precious jewel on a special altar and the stone produced plenty of gold every day.

One day Lord Krishna told Satrajit that he should give the magical stone to the King of the Yadus, Ugrasena, but Satrajit refused. The magnificent Syamantaka turned Dwarka into a rich and peaceful kingdom that was free from diseases, distress and privation.

Not long after this, Satrajit's brother Prasena went hunting and he had the Syamantaka hanging on a chain around his neck. Prasena was killed by a lion that took the jewel to a cave in the mountains. However, the cave was inhabited by Jambavan, the king of the bears and one of the Chiranjeevi, the seven immortals in Hinduism who are to remain alive on Earth until the end of the current Kali Yuga.

Rumors spread and it was believed that Lord Krishna had stolen the precious Syamantaka. Satrajit was worried that his brother had not returned, and he suspected Lord Krishna had murdered Prasena.

“Not only had Krishna also expressed the desire of possessing that gem. The recollection of that desire of Krishna convinced Satrajit that Krishna had murdered Prasena to possess that gem. When this rumor spread far and wide in Dwarika (Dwarka), people started looking at Krishna with a suspicious eye,” Ahalya Gautam writes.

Lord Krishna was innocent and they only way to prove this was to find the magical gem. He went to the forest, followed the trail of the deceased Prasena, found the man’s body and finally located the mountain cave where he saw the dead body of the lion. Inside the cave, Lord Krishna noticed tracks of a bear and followed them. Then, he saw the how Jambavan’s children were playing with the valuable jewel. Lord Krishna engaged in furious battle with Jambavan, the king of the bears.

When Lord Krishna did not return to Dwarka, his father Vasudeva was very sad, but the divine seer Narada offered comforting words to all people of Dwarka.

“You should not weep as Krishna cannot be slain. However, in order to ensure his safety and welfare they should also hymn the praises of Mother Ambika who would surely bring him back safely,” Narada said. 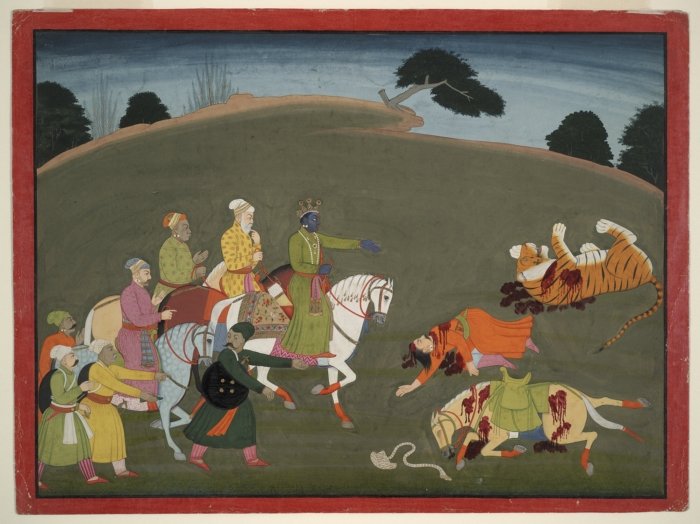 Krishna on horseback, an Illustration to the Bhagavata Purana Credit: Public Domain

The battle between Lord Krishna and Jambavan lasted 28 days, until the king of the bears finally grew tired. Lord Krishna took the precious gem, returned to Dwarka and gave the stone to Satrajit, who accepted the jewel, but with great shame and remorse.

Satrajit felt bad. He had accused Lord Krishna of murder and theft. So, he decided to offer Lord Krishna not only the jewel but also his three daughters Satyabhama, Vratini and Prasvapini.

Lord Krishna accepted the hand Satrajit's daughter, Satyabhama, but he had no interest in the jewel.

Not long after this, Lord Krishna left Dwarka and thieves used this opportunity to steal the precious gem. They broke into Satrajit’s palace, killed him and stole the Syamantaka. When Lord Krishna learned about this crime, he was furious. He traveled back to Dwaraka to avenge Satrajit's death.

Kritavarma, Akrura and Satadhanwa who were the thieves were chased down by Lord Krishna. Akrura, a chief of the Yadavas, an ancient people of India managed to escape with the jewel to Kashi.

Lord Krishna summoned Akrura and asked him to admit his guilt. When Akrura complied, Krishna let him keep Syamantaka on the condition that it was to remain in the city of Dwaraka.

Was Syamantaka A Real Jewel?

Since the fate of Syamantaka is unknown, many have speculated whether the precious stone was more than just a mythological jewel. Dwarka was long considered a mythological place, but this changed when underwater archaeologists discovered the ancient ruins of Krishna's kingdom on the coast in Gujarat, just near the Pakistan border. Could the Syamantaka still lie at the bottom of the ocean? 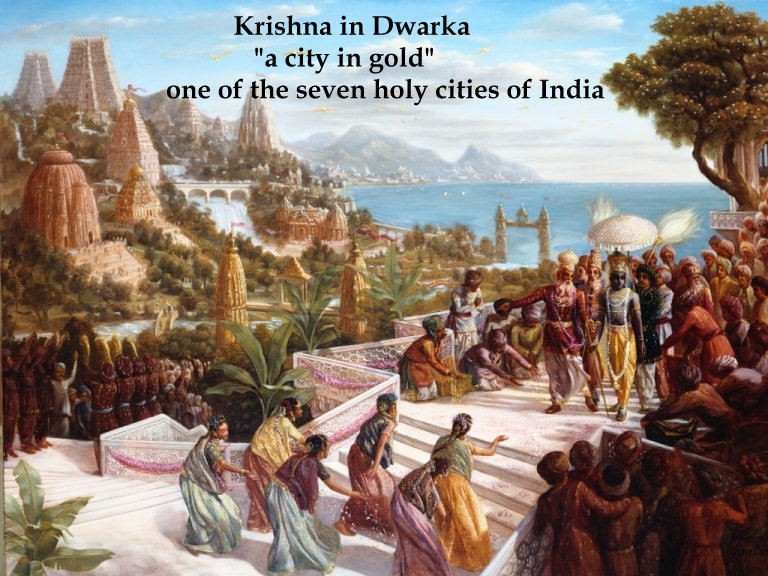 Some have suggested Syamantaka was the famous Koh-i-Noor diamond, which was known to have been in the possession of the Mughal emperors of India, and at present is one of the Crown Jewels of England.

"It was only really in the early nineteenth century, when the Koh-i-Noor reached Punjab and the hands of Ranjit Singh, that the diamond began to achieve its pre-eminent fame and celebrity – so much so that by the end of Ranjit’s reign pious Hindus were beginning to wonder if the Koh-i-Noor was actually the legendary Syamantaka gem mentioned in the Bhagavad Purana’s tales of Krishna," Anita Anand and William Dalrymple wrote in the book Koh-I-Noor: The History of the World's Most Infamous Diamond.

Whether Syamantaka was just a magnificent mythological artifact or a real, very valuable jewel is still debated.

Anita Anand, William Dalrymple - Koh-I-Noor: The History of the World's Most Infamous Diamond