A. Sutherland - AncientPages.com - The Russian national hero, Alexander Yaroslavich “Nevski” (1220-1263), was a younger son of Yaroslav, prince of the Russian province of Vladimir, located about 200 kilometers (120 mi) to the east of Moscow, Russia.

He is a legend today: his fame survived in form of his name on streets, various ships, public buildings and a number of stories passed down from one generation to another. 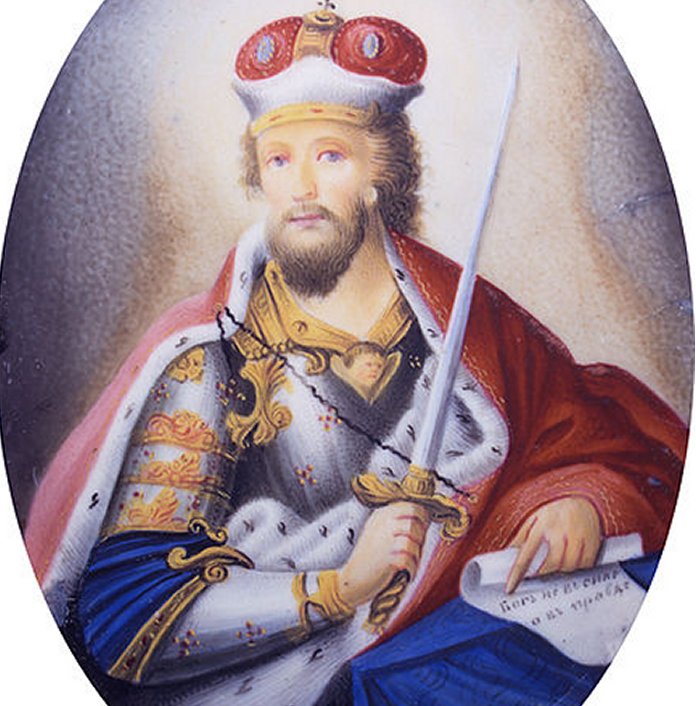 From Tales of the Life and Courage of the Pious and Great Prince Alexander found in the Second Pskovian Chronicle (1260–1280), we learn about this young man:

"By the will of God, Prince Alexander was born from the charitable, people-loving, and meek the Great Prince Yaroslav, and his mother was Theodosia. As it was told by the prophet Isaiah: 'Thus sayeth the Lord: I appoint the princes because they are sacred and I direct them…'

"... He was taller than others and his voice reached the people as a trumpet, and his face was like the face of Joseph, whom the Egyptian Pharaoh placed as next to the king after him of Egypt. His power was a part of the power of Samson and God gave him the wisdom of Solomon ... this Prince Alexander: he used to defeat but was never defeated ..."

Nevsky’s victory over the Swedes and German Knights was frequently invoked as propaganda during Soviet tough resistance to the German invasion in World War II. Alexander Nevsky has always inspired the Russian people.

In 1236, Alexander was a very young man when he was appointed prince and ruler of Novgorod, the prosperous center of trade in the region the Baltic Sea.

Teutonic Knights – Facts And History About The Christian Military Order

Novgorod was wealthy and so powerful that it was called ‘Lord Novgorod the Great’. However, compared to the the greatest commercial centers like Constantinople, Samarkand or Venice, every northern city (even Novgorod) was small and rather poor. Still, to the merchants from Northern Europe, Novgorod was big and impressive enough.

Alexander excelled early as a skilled fighter and quick-thinking strategist; however, at the beginning of his political career, his diplomatic rather than military skills were used to protect Novgorod, as the Mongols were on their way to extend their already vast empire in 1238–40.

Battle Of The Neva River And Nickname ‘Nevsky’

According to the 14th century ‘Novgorod Chronicle’, in the summer of 1240, the Swedish forces along with Norwegians, Finns, and Tavastians (modern subgroup of the modern Finnish people) reached the River Neva under the leadership of Birger Magnusson (1210-1266) and began building of a fortress on the River Neva.

They intended to march towards present-day St. Petersburg. Their work, however, was stopped by Prince Alexander of Novgorod and his army, who attacked the Swedes on July 15, 1240. 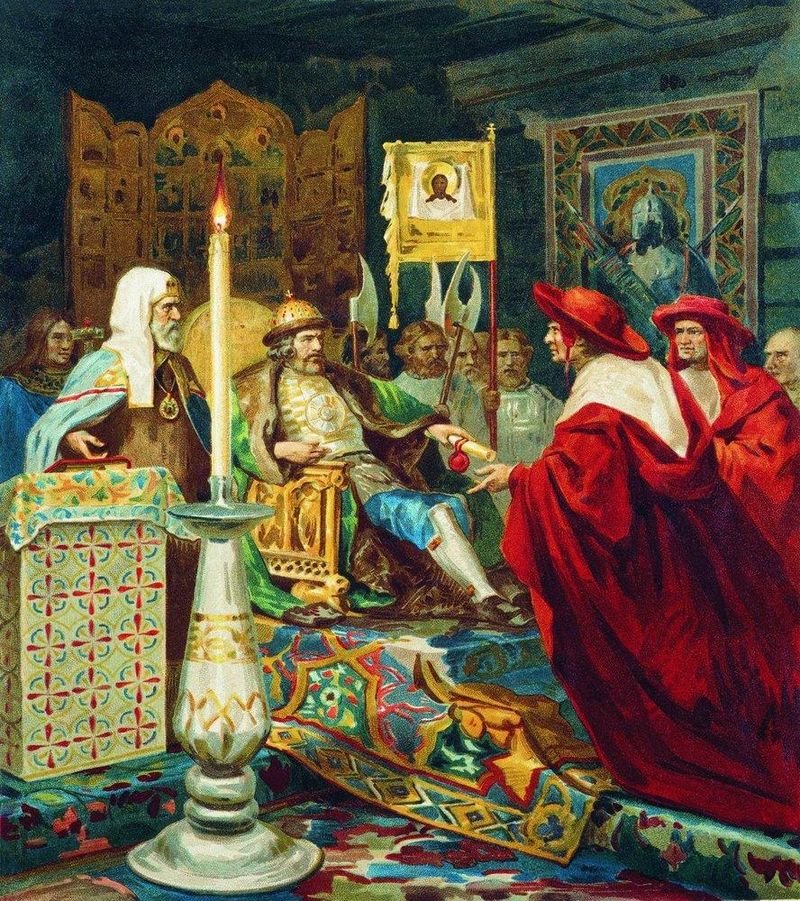 The envoys of the Roman Pope attend Alexander Nevsky. ( Sketch for the mural of the Cathedral of Christ the Savior in Moscow). Henryk Siemiradzki (1843–1902). Image via Wikipedia

They clashed together, and despite the fact that the Russian army was smaller in number, they succeeded in defeating the Swedes, who withdrew on their ships from the Novgorod’s territory.

His success prevented these countries from continuing their expansion in Russian territory. After this victory Alexander got his nickname "Nevski" - from the River Neva".

He faced a stronger test two years later when the Roman Catholic Teutonic Knights, were on their way across Eastern Europe, to convert pagans to the Christian faith, or to kill them. By 1241, much of Novgorod’s territory was also in their hands. It happened when Alexander was in exile (despite his victory on the River Neva in 1240) due to troublesome political disputes in Novgorod.

Authorities recalled Nevsky to face the danger from the Livonian Order (a branch of the Teutonic Knights) and in 1241, he gathered an army.

As it was estimated, the crusader forces likely numbered around 2,600, including 800 Danish and German knights, 100 Teutonic knights, 300 Danes, 400 Germans and 1,000 Estonian infantry. The Russians had around 5,000 men. Nevsky and his brother Andrei's bodyguards in number of around 1,000, plus 2000 militia of Novgorod, 600 horse archers and 1400 Finno-Ugrian tribesmen.

Alexander and his men faced the heavy cavalry of the enemy on the ice of Lake Peipus in Estonia on April 5, 1242.

He defeated the invaders and this battle is known today as the Battle of the Ice. His army mostly consisted of foot soldiers with bows or pikes, accustomed to moving over ice. The Germans did not feel safe on Peipus’ frozen surface and Nevsky wore the Germans down in hand-to-hand combat. 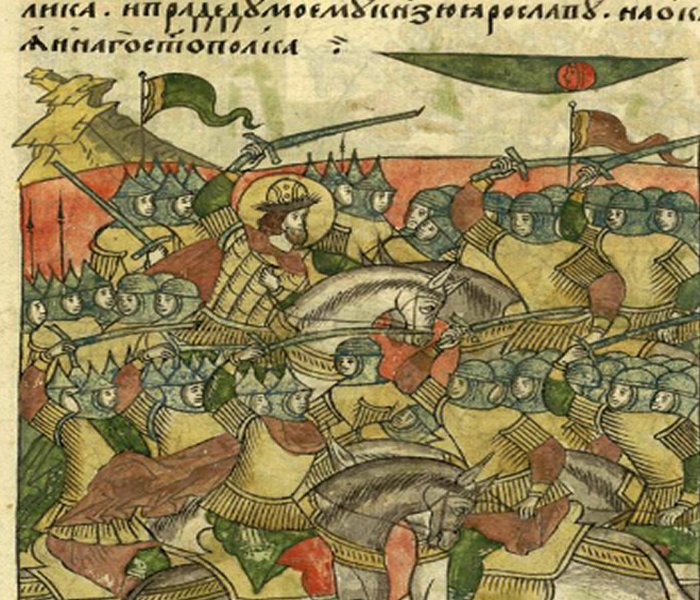 Alexander Nevsky ice battle on the Lake Peipus, between Estonia and Russia. It was an important, decisive Novgorod victory. Germans lost all territorial claims over Russian land. Image source: Wikipedia

“…The [Russians] had many archers, and the battle began with their bold assault on the king’s men [Danes]. The brothers’ banners were soon flying in the midst of the archers, and swords were heard cutting helmets apart. Many from both sides fell dead on the grass. Then the Brothers’ army was completely surrounded, for the Russians had so many troops that there were easily sixty men for every one German knight. The Brothers fought well enough, but they were nonetheless cut down…”

He dismissed the envoys of the Roman Pope and their attempts to cause war between Russia and the Golden Horde, because he understood the uselessness of such war at a time when they were still a powerful force.

Nevsky was an excellent diplomat, a far-sighted and cautious politician in difficult times of the medieval Europe, full of diverse conflicts, which were both complex and very serious.

He understood perfectly that he was completely dependent on the Golden Horde in his actions. There was no way to prevent the Mongols from entering the kingdom during the 1250s. Many were surprised at how Alexander received the potential enemies from the east.  Instead of fighting, he immediately put himself under their rule.

Fighting The Golden Horde Would Be A Pointless Decision

Obviously, he did not believe he had a chance to win over such enemy. The Russian people, after much bloodshed, would be enslaved, and the wealth of the country looted. Now, he could act as a mediator and avoid violent military confrontations.

Historians still seem to be uncertain about Nevsky’s behavior when it came to his relations with Mongols. He may have thought that Catholicism was a much more real threat to Russian national identity than paying a tribute to the Khan, who had little interest in Slav religion and culture.

Alexander was installed as the Grand Prince of Vladimir (i.e., the supreme Russian ruler) in 1252. He died on November 14, 1263. Prior to his death, he took monastic vows and was given the religious name of Alexis.

He was canonized in 1547 and received his own feast day on September 12. In 1725, Catherine I of Russia founded the Alexander Nevsky Order.