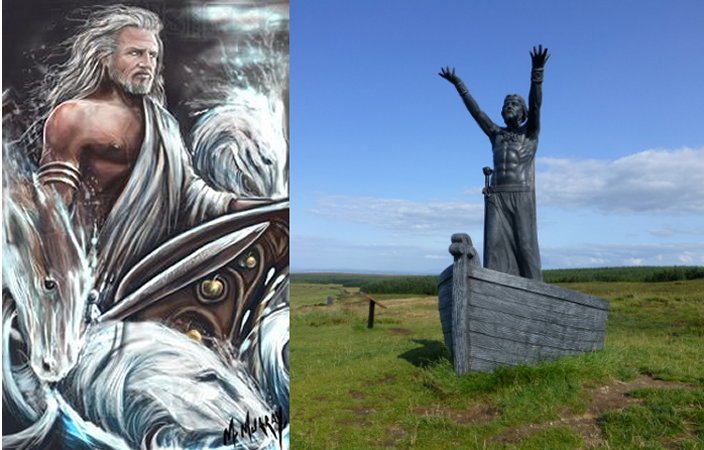 Manannán mac Lir was also believed to have been a god of the weather and healing. His father was Lir, an old and obscure god of the sea and ocean.

Manannán mac Lir had a beautiful wife Fand (Fiand) who for some time lived with his consent with a hero, known as Cuchulainn. Later, when she had to part with him, the god of the sea used to wear their mantle so that they would never meet again. 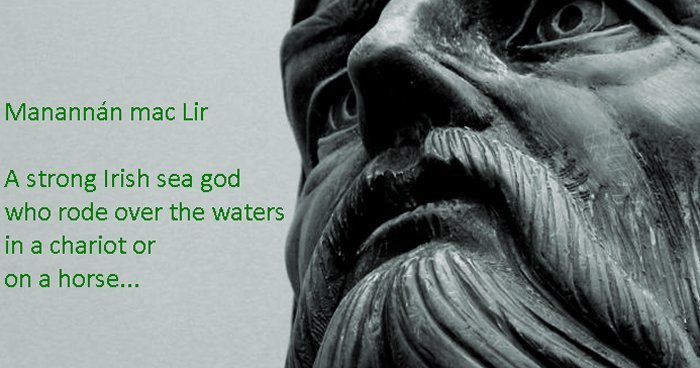 He raised the god Lugh (Luga) himself and was a foster father to other children. As he never lived on land, he was believed to dwell somewhere in the ocean on an island known under different names (one more beautiful than the other) such as: Tír Tairngiri (Country of Promise) or Mag Mell (Plain of Joy) or even and Emain Abhlach (Island of Apple Tree), which was identified with the island of Avalon, in later legends.

The name of this god derives from that of the Isle of Man (also known as Manx). In ancient beliefs, the island was ruled by Manannán mac Lir, who would protect the island from invaders with his misty cloak.

According to a legend, he was the first ruler of the island named for him; “he lived in a castle on the top of Mount Barrule, where he is buried, although other stories claim his burial mound can be seen on the seashore beneath Peel Castle on the Isle of Man". A vantage point looking out to sea was called Manannán’s Chair, from which he was said to keep watch.

Manx fishermen claimed that, as they mended their nets, Manannán came to them, walking along the seashore followed by a curious being who seemed to have no head or torso but three legs—the symbol of the ever moving sea and also the crest of the Isle of Man…” (P. Monagan)

On the Isle of Man, the history of the Triskelion (‘three legs’) goes as far back as pagan times and was originally a symbol of the sun and of power and life.

Manannán has many extraordinary magical powers. He owned a self-propelling boat named Scuabtuinne ("wave sweeper"), a sea-borne chariot drawn by the horse Enbarr ("water foam"), a powerful sword named Fragarach ("the answerer"), and a cloak of invisibility (féth fíada).

Mazu: Chinese Goddess Of The Sea - Protector Of Fishermen

The god used a chariot drawn by horses to move across the waves on the sea, traveling faster than the wind could blow. His favorite horse was named Enbharr. His attribute was a pig and he possessed magical pigs that could be eaten each day and appear alive next day.

He possessed the ability to change his form to become any creature he wanted even a particular mortal if needed. He could grant his supernatural powers to others and create illusions of things to make them numerous or make them invisible.

Manannán mac Lir is believed to be older than the Tuatha de Danaan. He remained affiliated with both the Tuatha Dé Danann and the Fomorians. However, he did not originally belong to Tuatha Dé Danann, one of the most central deities of ancient Ireland. This lineage is only given to him by a later tradition.

Tuatha Dé Danann accepted him and he helped them after they were defeated by the Milesians and were forced to hide. Thanks to him, they could retire to the Otherworld (also called 'Sidhe' or the 'Hollow Hills') and remain invisible to people. The invisibility was brought by magical fog.

Manannán mac Lir gave Tuatha Dé Danann even more, namely, immortality and eternal youth. He also invited them to an extraordinary feast where magical pigs were served and then, endlessly renewed after having been eaten.

In many Irish and Scottish tales, Manannán is sometimes a merchant mariner or a brave sailor who possess extraordinary celestial navigational skills so he is never disoriented or lost at sea. Oral tradition has survived until today on the Isle of Man and there are still many stories about the sea god Manannán mac Lir.

Moore A. W. The Folk Lore of the Isle of Man

Monagan P. The Encyclopedia of Celtic Mythology and Folklore