They vary in shape and size and according to sources, the number of megalithic rocks is 1,451.  No doubt, the megaliths represent a prehistoric heritage, older than Borobudur Temple, but no one knows  exactly their purpose and use of these rocks in ancient times. 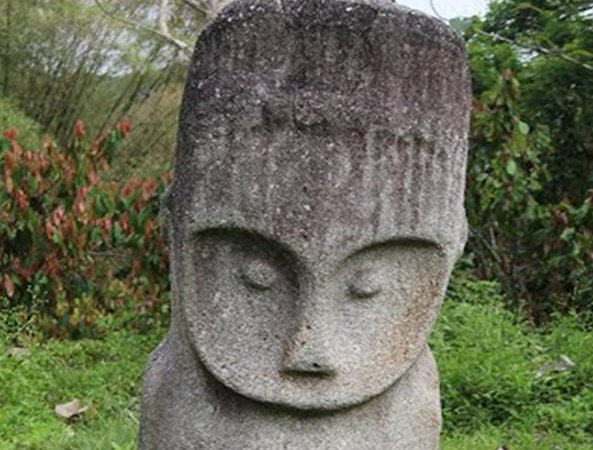 Located in a distant, isolated village that only a small number of Indonesians have heard about, mysterious statues of Bada Valley, Indonesia have no inscriptions to explain what or who they actually symbolize, who their builders were or why they were built.
The tallest and best known carved standing stone statue in the valley is a statue known as 'Palindo' which translates as 'The Entertainer' and measures over 4 meters.

The "Entertainer" has round eyes and a large nose that extends down and a deep carved mouth make him Watu Palindo looking cheerful and friendly. Besides Watu Palindo, there is another famous stone - Langka Bulawa ("Queen with a golden leg"), which depicts a woman's figure.

There are 13 other finely carved statues in the Bada Valley, with others in the nearby Besoa and Napu valleys inside the Lore Lidu National Park.

Hundreds of megaliths in this region of the country that go back to the 14th century  are called watu ("stone") in the local Badaic language and arca ("statue") in Indonesian.

Some people suggest that the stones were carved around 5,000 years ago, while others say the megaliths were made about 1,000 years ago. Meanwhile,  other people saythat the stones are related to megalithic culture in Laos, Cambodia, and other regions in Indonesia in the past 2,000 years. 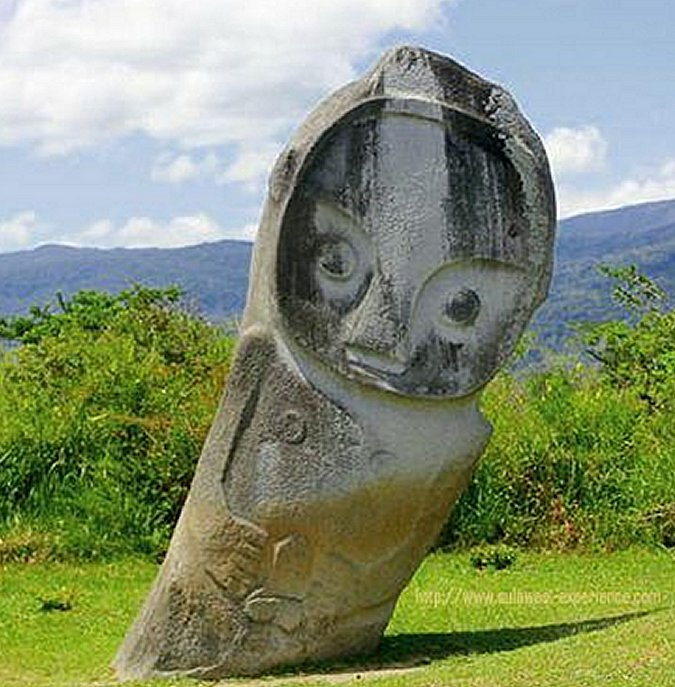 As we see, dating of these impressive megaliths is uncertain, and for now, the bizarre statues are dated to be from 5000 to 1000 years old.

Archaeologists claim they haven’t found enough clues to explain their history yet, because at the time of their discovery, local people scraped the statues out of thick moss and dirt in order to clean them.
Other sources say, farmers grow rice around them and simply ignore them all, probably unaware of their historical value and mysteries behind them.

Many have long wondered who were these rock sculptors because it is commonly known that granite rocks are very hard, which makes working with them - very difficult.

Were The Megaliths Used To Worship Ancestors?

Local people Of Bada Valley and neighboring areas believe that the stone was used
to worship ancestors. They also have their own story about the origin of these very ancient megaliths.

Not only that, the residents also have stories about the origin of the formation
of these megaliths. According to local folklore, there was once a dangerous rapist who was finally condemned to be a piece of stone. 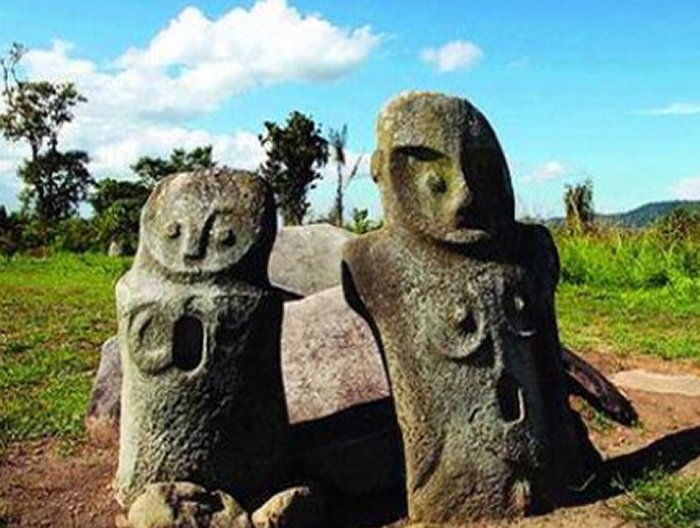 Another story says about another large megalith named Tadulako. The community said that Tadulako was known as a village guard, but after stealing rice he was changed to stone.

Bada Valley's megaliths are also linked with human sacrifice or supernatural powers and some other ancient beliefs suggest they were intended to ward off evil spirits.

The elders in the village of Sepe believe that the statue of Palindo which means the entertainer in the local language is a representation of their predecessor population, the Tosaloge tribe. These people believe that  the largest  and the most celebrated statue in the area, which is that of  Palindo ('The Entertainer') may represent representation of Sepe's first mythological inhabitant, Tosaloge.

Yet another legend tells of the Raja of Luwu from the oldest kingdom in South Sulawesi, who once ordered 1800 statues to move  from Sepe to Palopo. It was not any easy task for the workers because the distance between these two places is large.

Anyway, the King Luwu wanted to prove his dominance over Bada, but his effort failed. One statue was ordered to originally face the south, but the Bada people turned it to face the west.

The Raja's followers tried to turn it back, but an accident happened and the statue fell onto its side, killing 200 of people.

In the past there was a tradition to give offerings to this statue before doing great work, such as opening new land for agriculture.