A. Sutherland - AncientPages.com - This artifact is very small. It is only 7 cm (2 3/4 in) high. It is known as the Bimaran Casket and it is made of gold. It was found without  its lid and the bottom of the artifact is decorated with a lotus, associated with purity and beauty in the religions of Hinduism  and Buddhism.

The artifact, probably Indo-Greek work, is an ancient Buddhist reliquary and represents a rare iconography. 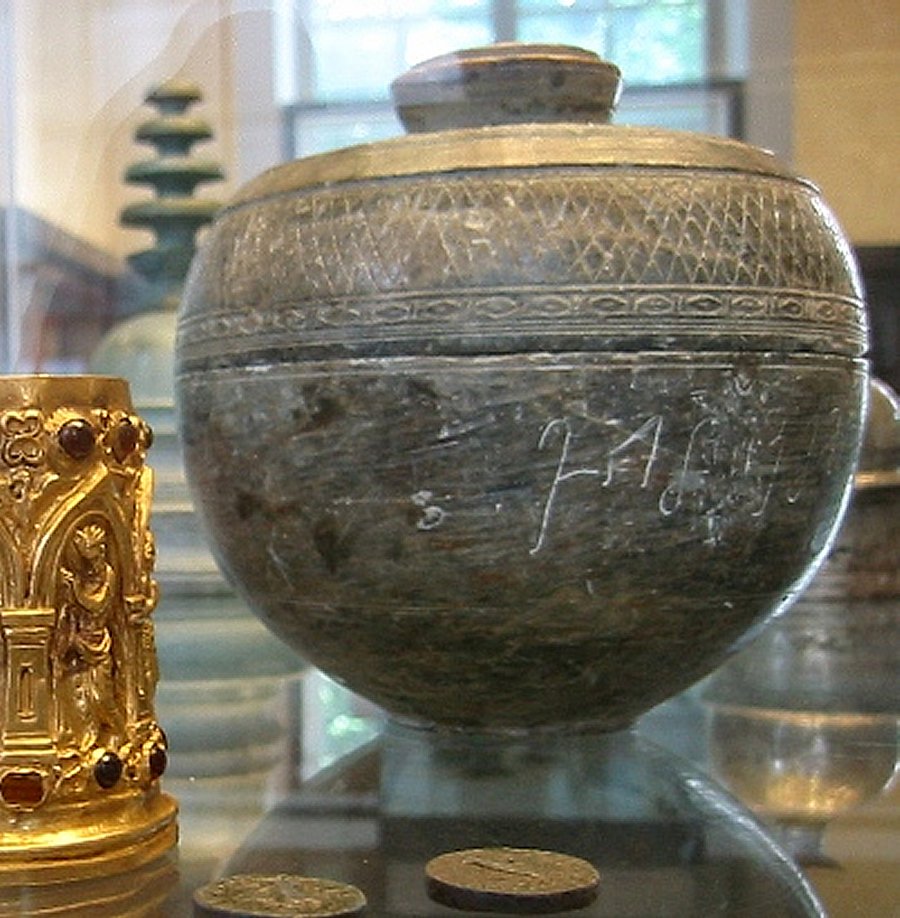 It was found inside the stupa at Bimaran, near Jalalabad in eastern Afghanistan. His discoverer is the archaeologist Charles Masson  (1800–1853), whose real name was James Lewis, a British East India Company soldier, traveler and explorer.

The Bimaran Casket was discovered in a form-fitting steatite box. The inscription on the small container
reads as follows:
"Sacred gift of Shuvaraksita, son of Munjavamda, presented for Lord's relics, in honor of all Buddhas."
(translated by G. Fussman). The Indo-Scythian coins found inside were in pristine condition, apparently uncirculated. Collection: British Museum, London

In the region of Bimaran, archaeological excavations revealed remains of four larger stupas and at least two groups of votive stupas. The first stupa is 38.40 meters in circumference but in fallen into partial ruin or decay.

It has shallow decorative pillars attached to a wall and inside among  jewelry and coins was a steatite vase and cover, both with kharoshthi (an ancient Indian script) inscriptions. There was also found  a gold reliquary inset known as the Bimaran Casket, decorated with rubies and  depicting scenes of Buddha.  The casket is now at the British Museum in London.

The Bimaran relic is cylindrical in shape and covered with relief carvings of eight figures hammered from the reverse. Photo credits: British Museum

Inside was a silver reliquary jewels and coins. The fourth is 43.9 meters in circumference and is surrounded by extensive building debris. It contained nothing. In addition to the stupas there is a complex of six artificial caves in the foothills to the north.

The Great Stupa At Sanchi – Oldest Stone Structure In India

He was the first European to discover the ruins of Harappa near Sahiwal in Punjab, now in Pakistan.

When Masson found the casket during his work in Afghanistan between 1833 and 1838, it contained coins of the Indo-Scythian king Azes II, who is believed never existed and finds attributed to his reign probably should be reassigned to Azes I. Therefore, researchers  suggested a date around 30 BC to around 10 BC.

The artifact is also sometimes dated to a slightly posterior date of 50 CE, based on a redeposition theory, and sometimes much later (2nd century CE), based on artistic assumptions. The Bimaran relic is cylindrical in shape and covered with relief carvings of eight figures hammered from the reverse. This include two groups of Brahma, Buddha and Indra on either face and two devotees.

The inscription records that the reliquary contained some of the actual bones of the Buddha however by the time this casket was found, both the lid and the relics were missing.

The small gold carving of Buddha in this casket is thought to be the earliest anthropomorphic representation of the Buddha.