A. Sutherland - AncientPages.com - The Clava Cairns are located near Inverness, a city in the Scottish Highlands. According to no published excavations, the dates for the Clava monuments are thought to belong to the Late Neolithic or Early Bronze Age (about 2500 - 1700 BC). 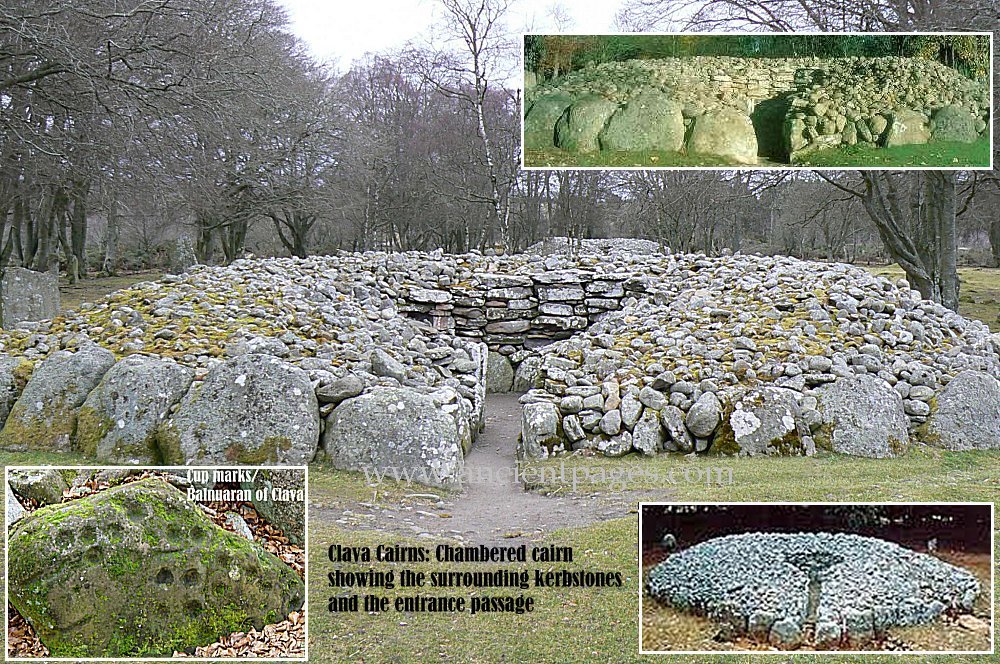 As explained in the book "How to read prehistoric monuments" by Alan Butler, "the Scottish examples, especially the ones around Inverness, are often called ‘Clava Cairns’, though in fact this name refers to three specific cairn burials at Balnuaran of Clava, Inverness.

Balnuaran of Clava contains (three tombs), Inverness, Scotland and they were first used around
2000 BC and then again in 1000 BC. 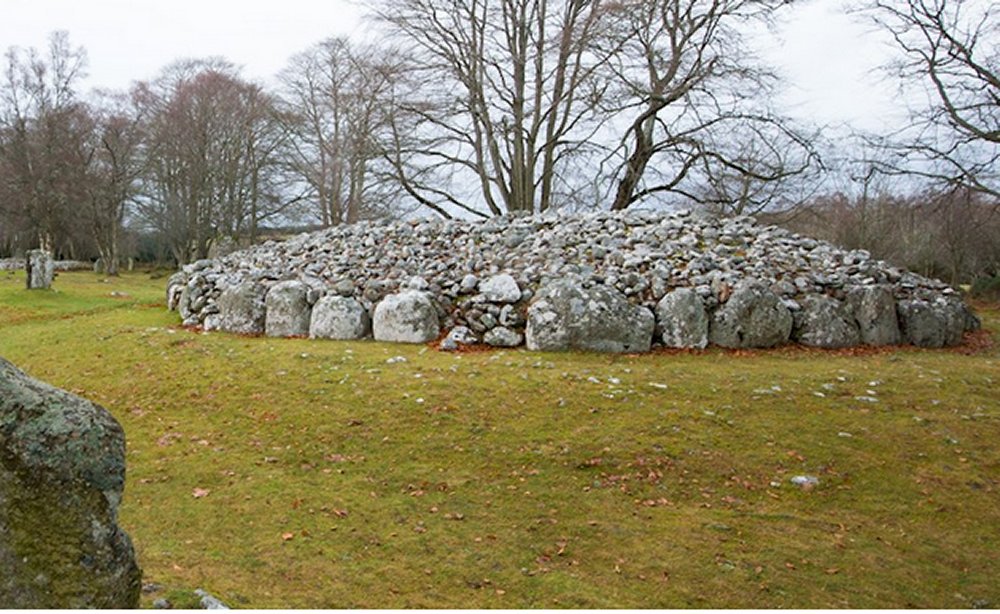 For millennia, this cemetery (and also a smaller one in the vicinity, at Milton of Clava) remained sacred places for the Bronze Age peoples, who conducted there their burial activities and rituals.

There are two different types of cairn tombs in Scotland. One variety is a corbelled passage grave (Corbelled Tomb) and Passage Grave with a single chamber and a short entrance passage.

The passage usually faces southwest (towards midwinter sunset). The other type of cairn tomb had noapparent entrance and no specifically created roof to the chamber. It is, essentially a ring of stones.Cairn tombs are invariably surrounded by a series of standing stones, and a kerb of stones often also surrounds the cairn..."

Largest Collection Of Ancient “Cup-Marked” Rocks Ever Found In Scotland

For millennia, this cemetery (and also a smaller one in the vicinity, at Milton of Clava) remained sacred places for the Bronze Age peoples, who conducted there their burial activities and rituals.

The belief in an existence of an afterlife was widespread and deeply respected by the Bronze Age societies and was expressed by their funerary practices and additionally by ceremonial monuments which were constructed in Bronze Age Scotland. 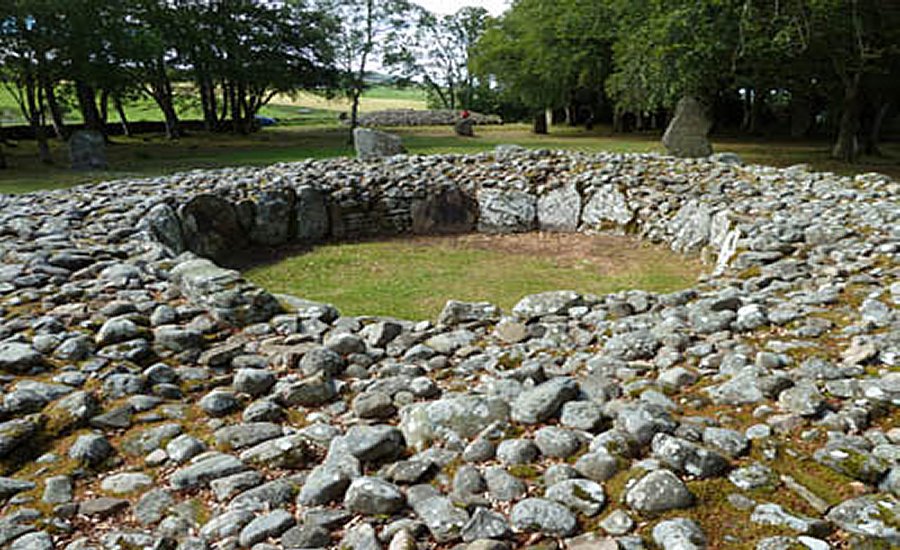 These range from cairns built for the disposal of the dead to stone rows, stone circles and various different types of ‘hengiform’ monument (a very small henge-like structure, typically less than 15?m across). In many cases, these occurred in monument complexes that are likely to have spanned the third and second millennia BC.

At around 2000 BC a row of large cairns was built, three of which can still be seen today.

Excavations have found evidence for farming on the site before any of these monuments were built. Many of the stones used to construct the cairns have cup marks on them – these may have been reused from another place, perhaps an earlier sacred site. 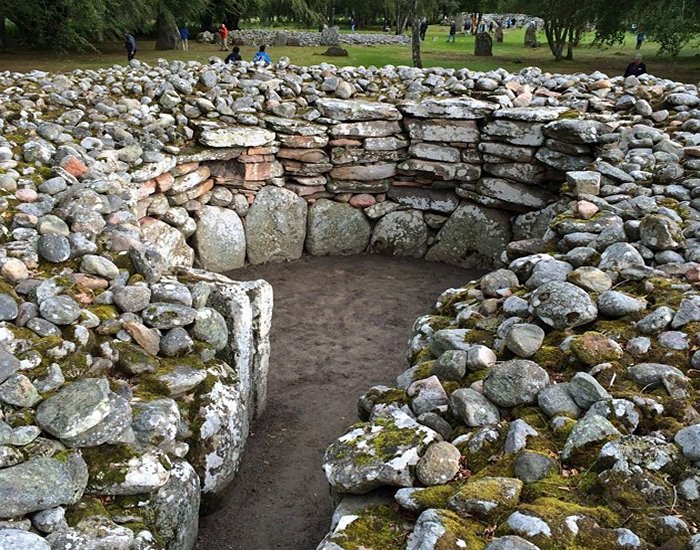 Ancient Clava Cairns were built nearly 4,000 years ago in the Scottish Highlands near Inverness. Burials here were likely but much mystery remains. Guilded fountains with a castle towering above on a volcanic crag are part of what sets Edinburgh apart. Shot on assignment in Scotland aboard The Lord of the Glens with National Geographic Expeditions. @JimRichardsonNG @NatGeoTravel @NatGeo #scotland #iphonephoto (source)

Each cairn is surrounded by a circle of standing stones. The three prominent cairns form a line running north-east to south-west and also the passages of the two cairns are aligned towards the south-west, suggesting that the builders focused on eyes on the midwinter sunset.

Likewise, the location of the standing stones, especially the tallest ones is related to the setting sun in the south-west.

According to an ancient tradition, only one or two people were usually buried in each cairn, which could indicate that these resting places were used for particularly important persons in this Bronze Age society.

From the limited evidence available, it seems that the Clava cairns were not typical burial places
for communities, but for selected individuals, both male and female, which indicates that identity of these important personalities in the society was also celebrated in death.

These individuals were memorialized by the erection of the Clava cairns but also stone circles and small henges.