AncientPages.com - The remains of a 4,500 year old ramp system to transport the huge alabaster blocks used in the construction of Egypt’s Great Pyramids have been unearthed by University of Liverpool archaeologists.

The team collaborating with their colleagues from the French Institute for Oriental Archaeology in Cairo made the discovery at the site of Hatnub, an ancient alabaster quarry in the Eastern Desert. 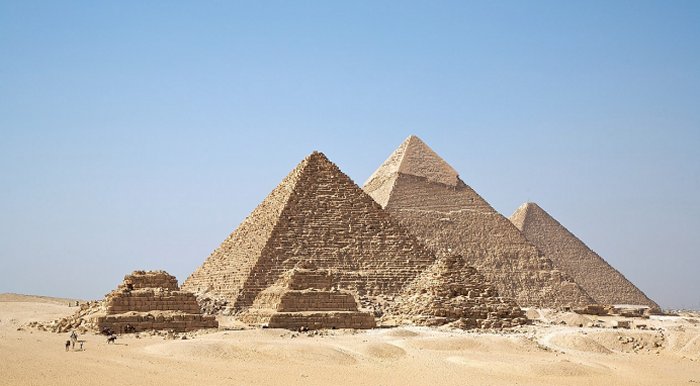 All Gizah Pyramids - a view of the pyramids at Giza from the plateau to the south of the complex. Ricardo LIberato/Wikipedia

The ancient ramp might explain how stone blocks were transported from the quarries to the pyramids’ building site.

“The Hatnub quarries were the most prestigious source for Egyptian alabaster, the milky white banded stone which was much beloved of Egyptian civilization,” Egyptologist, Dr Roland Enmarch, University of Liverpool said in a press release.

“Their importance today lies in the fact that they are archaeologically very well preserved.

“The quarry preserves large numbers of inscriptions left by ancient quarrying expeditions from 4500-4000 years ago. These enable us to better understand the personnel and logistics of organizing expeditions to these desert quarry sites.

“Equally remarkably, the archaeological context of the quarries is very well preserved.

“They sit in a broad landscape of Bronze Age structures related to stone extraction and transport: huts for sleeping and stone working, pathfinding cairns, ancient footpaths, and even simple dry-stone religious structures. The quarries are connected to the Nile by one of the best-preserved Bronze Age roads in Egypt. 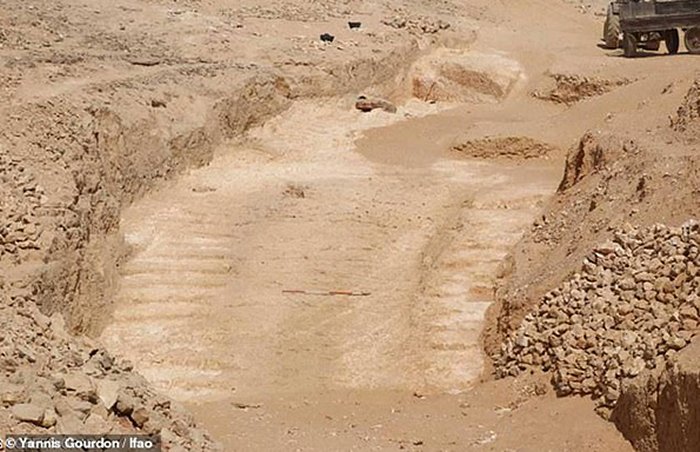 The Hatnub quarries were the most prestigious source for Egyptian alabaster, the milky white banded stone which was much beloved of Egyptian civilisation.

“In our most recent season, we discovered an extremely well preserved ramp leading up out of the quarry, with traces of post holes that will enable us to reconstruct in more detail the ancient technologies of stone haulage and extraction.

“Since this ramp dates to the reign of Khufu (builder of the Great Pyramid at Giza, one of the Seven Wonders of the World), our research offers the exciting possibility for offering further insights into the logistics and technologies used in constructing that astonishing building.”

Along the sides of the ancient ramp are two staircases lined with postholes, to which ropes were likely tied thousands of years ago to drag the huge stone blocks.

Such a design would have alleviated some of the burden for the workers who had to pull these huge loads.

Yannis Gourdon, from the French Institute for Oriental Archaeology in Cairo, said: “This system is composed of a central ramp flanked by two staircases with numerous post holes.

“Using a sled which carried a stone block and was attached with ropes to these wooden posts, ancient Egyptians were able to pull up the alabaster blocks out of the quarry on very steep slopes of 20 percent or more.”

Dr Roland Enmarch added: “Our joint Anglo-French mission to Hatnub aims to study all of these features of the site, in order to produce a more fully rounded picture of how quarrying worked in Ancient Egypt, and what it meant for the people involved.”