A. Sutherland - AncientPages.com - In Babylonian mythology, Irkalla was the underworld from which there was no return. The realm of the dead or the lower world was also called Arali, Kur, Kigal, Gizal.

There were two traditions explaining how humans entered the netherworld. According to one of them, the road to the netherworld passed through the steppe land swarming with demons, across the Khubur River, and then through seven heavily guarded gates. 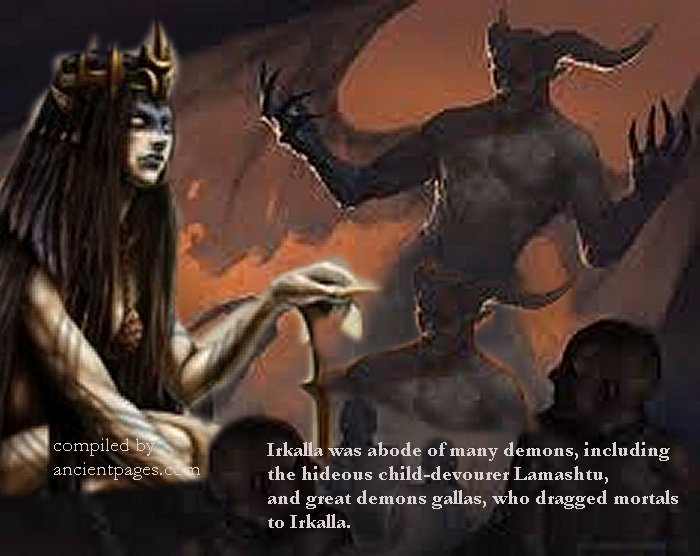 Another version described a road to the netherworld crossed by boat down one of the rivers of the upper earth and across the apsu (the sweet waters under the earth) to Irkalla, the lower earth.

At first, the only ruler of Irkalla was Ereshkigal ("Queen of the Great Below"), a granddaughter of Enlil and older sister of Inanna (Ishtar). Ereshkigal’s judgment and laws were always indisputable.

Later she ruled the netherworld with her husband, Nergal, the king of death who brings disease, plague, and all misfortunes caused by heat.

Irkalla was abode of many demons, including the hideous child-devourer Lamashtu, the fearsome wind demon and protector god Pazuzu, and great demons gallas (gallus), who dragged mortals to Irkalla.

On the basis of various texts, it can be assumed that the Babylonians located the entrance to the underground world, where the sun set, in the western desert. The Babylonian sun god, Shamash descended to these regions in the evening and appeared again from the mountains in the east, in the morning. The netherworld was situated even lower than the abzu, the fresh-water ocean beneath the earth.

Grave Of The Deceased – The Entrance To Irkalla

In the Babylonian writings, the grave was the entrance to the underground world for the man who was buried in it. The Babylonian myths were inspired by the Sumerian beliefs, and later repeated and further developed.

All people, regardless of their positions, age or morals, descended after death to Irkalla. It was the same afterlife for all souls.

The only food or drink was dry dust, but family members of the deceased would pour libations for them to drink.

To the gloomy house, seat of the netherworld,

To the house which none leaves who enters,

To the road whose journey has no return,

To the house whose entrants are bereft of light,

Where dust is their sustenance and clay their food.

They see no light but dwell in darkness,

They are clothed like birds in wings for garments,

And dust has gathered on the door and bolt..."

(The Descent of Ishtar to the Netherworld" 4-11)

Not all views of afterlife were the same among ancient beliefs of other cultures.

Unlike other views of afterlife, in the Sumerian underworld, there was no final judgement of the deceased and the dead were neither punished nor rewarded for their deeds in life. A person's quality of existence in the underworld was determined by his or her conditions of burial. 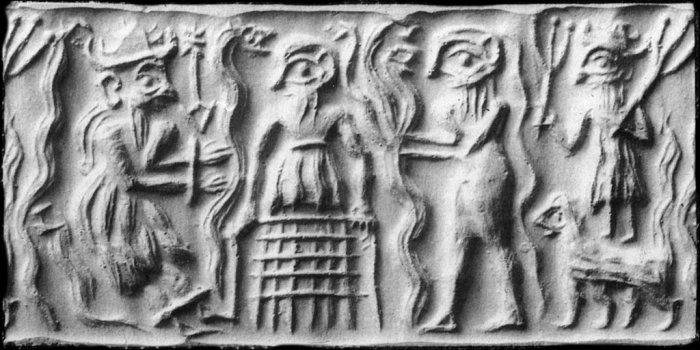 As the subterranean dark realm, cut off from life and from God, Irkalla was the ultimate destination for all who die. The realm is similar to Sheol (She’ol) of the Hebrew Bible, where all the dead - both the righteous and the unrighteous – must meet, regardless of the moral choices and deeds made in life.

But at the same time, is very different from more hopeful visions of the afterlife that later appeared in Platonic philosophy, Judaism, and Christianity and unlike visions of the ancient Egyptian afterlife.

After crossing the Hubar river, the deceased (naked or clothed in feathers like birds) stood in front of the seven city walls and had to pass through seven gates guarded by the guards. In Irkalla, the deceased had to face Ereshkigal as he/she was born – naked, without garments and personal ornaments. The ruler would pronounce them dead, and their names would be recorded on a tablet by a scribe.

Finkel I. The Ark Before Noah: Decoding the Story of the Flood"