A. Sutherland - AncientPages.com - The world of sleeping stone giants, rock towns and weird rock formations does really exist. There is also an ancient legend related to these amazing structures.

The rocks created by the Mother Nature are today surrounded by ancient myths and legends created by people who lived in the vicinity of the rocks looking in the darkness like human silhouettes. 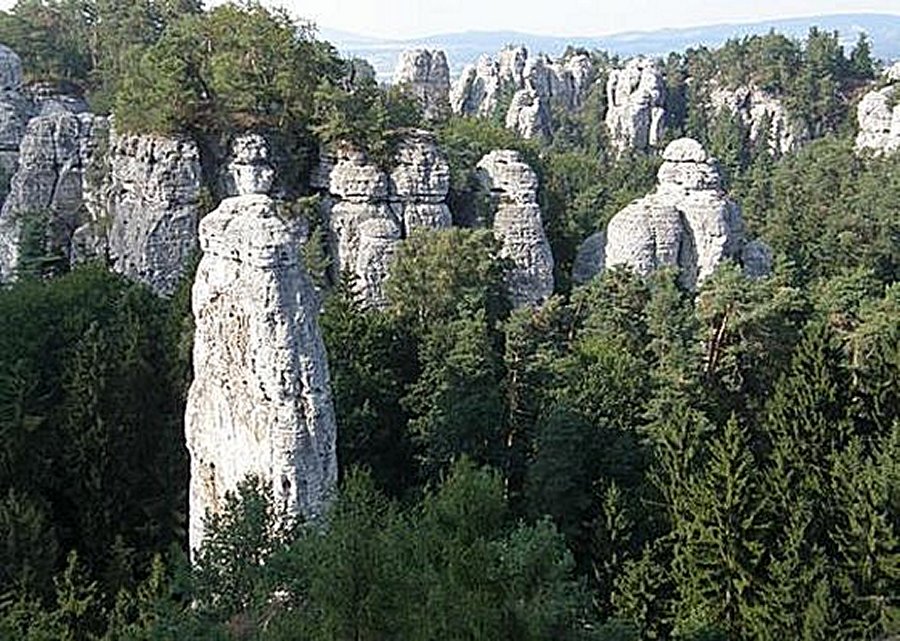 Is this perhaps a cursed wedding party with a bride and groom and the wedding guests? As one of the legends says they were all turned to stone.

Were they feared or worshiped or both? Legends suggest that in prehistoric times the mystery of sainthood and worshiping of deity were connected with the bizarre rocks.

Countless are also legends and stories about people being turned into stone. Such stories from ancient times are known in many parts of the world, including Europe and the Czech Paradise.

Perhaps among these stone figures you can imagine a bride and groom standing in the rock towers as well as the other wedding guests. In the far distant past, the ethnic inhabitants gave different names to the rocks after legendary beings. 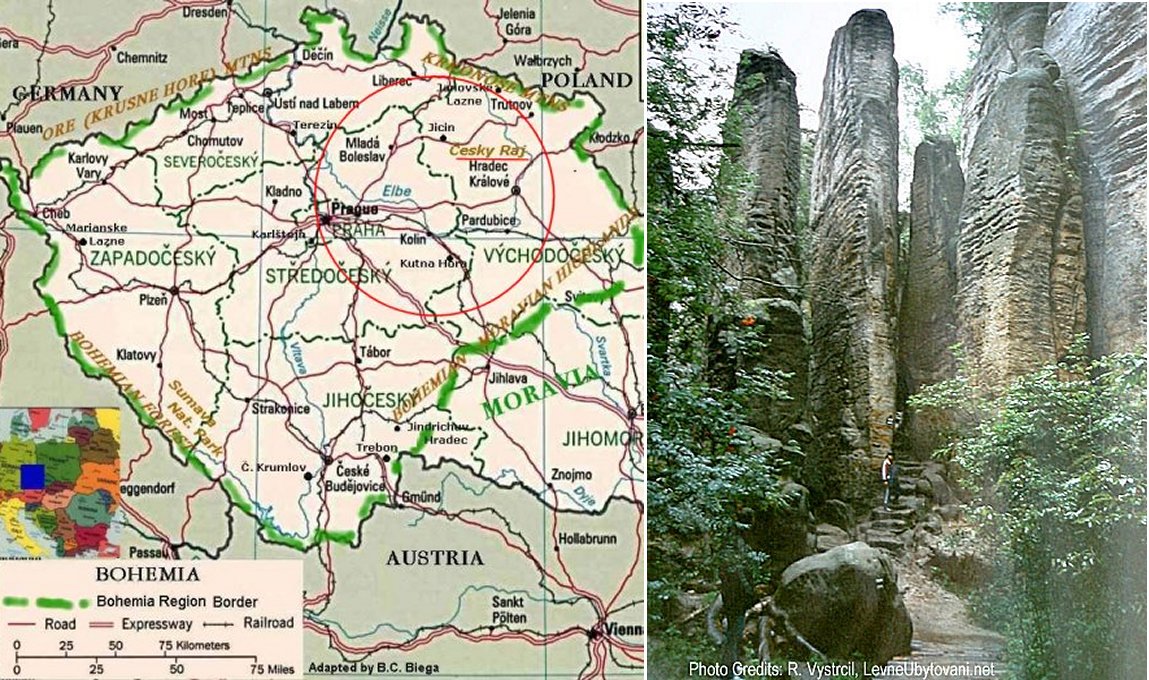 The rock cities, located approximately 100 km to the north-east of Prague, Czech Republic are all of Mesozoic age and cover an area of 92 square km.

One legend is especially very popular. It is related to Hans Heiling (Jan Svatos) and the rock formations
on the Ohre Riveand. The legend says about the cursed wedding of Jan Svatos. The first massive rock cliff represents Svatos, while the second is the bride and the priest, followed by other rock cliffs named Witnesses, Musicians, Mother-in-law, and Castle.

The legend that originates from Loket, a town in Bohemia in Western Czech Republic says that Svatos was the legendary son of a water fairy from the river Ohre, who was  taught to master magic and command spirits and he knew how to cast spells. Once he had become rich and powerful and ordered the spirits under his command to build a great city.

According to another local legend diverse hollow places in the rocks are inhabited by benevolent gremlins that used to help local inhabitants.

One day, there was a dispute between them and villagers who wanted to possess more than what one needs or deserves, so the gremlins abandoned their rocky abode and vanished. 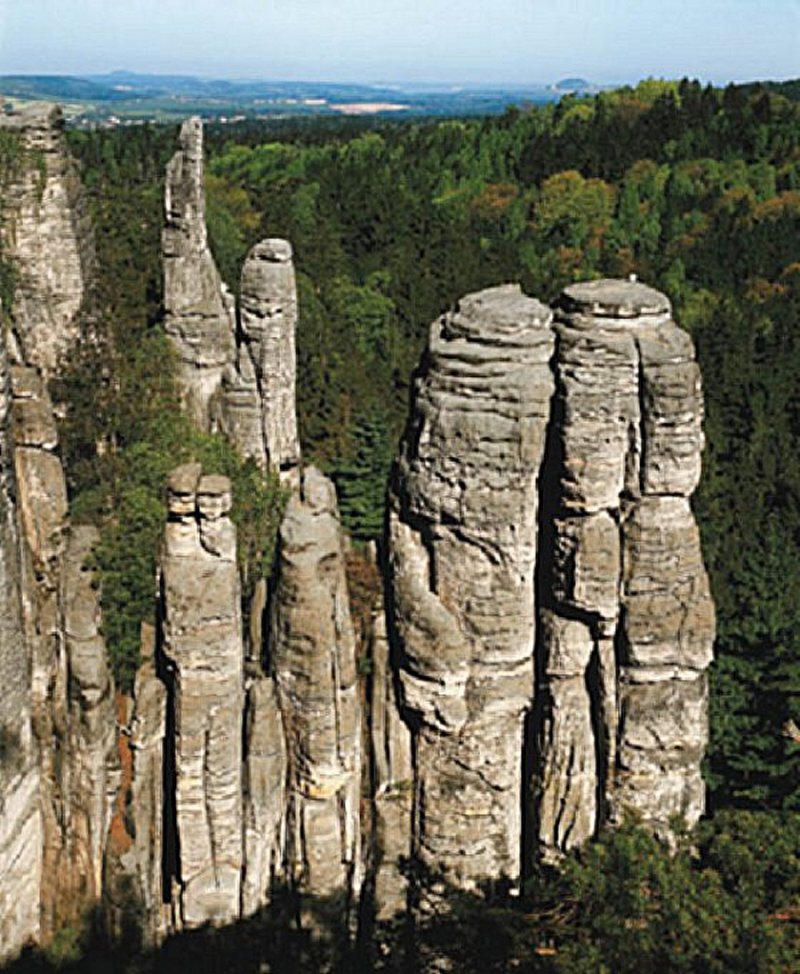 The granite rocks above the Ohre, named Hans-Heiling-Felsen (Svatošské Skály in Czech) were long believed to be the ruins of this city. When Hans Heiling discovered that he could not achieve human happiness even with his supernatural powers, he discarded them and died fighting a bear.

Another version of the story is that the rock formation is a petrified wedding party.

Was Svatos perhaps one of ancient wizards who could do magic?

90 -100 million years ago in the Cretaceous Mesozoic age, the sea covered the northern part of the region but then it began to retreat leaving variety of layers of sandstone sediments cemented with clay, kaolin mixed with other material. Along with erosion, gradual weathering and drifting away of materials, time helped to create enormous diversity rock shapes, high vertical walls and deep canyons.

Mountains symbolize the meeting place of heaven and earth, ascent from animal to spiritual nature and eternity. This landscape truly seems eternal and timeless.

The bizarre shapes of the rocky Bohemian empire remind us of faces, animals and standing human figures. 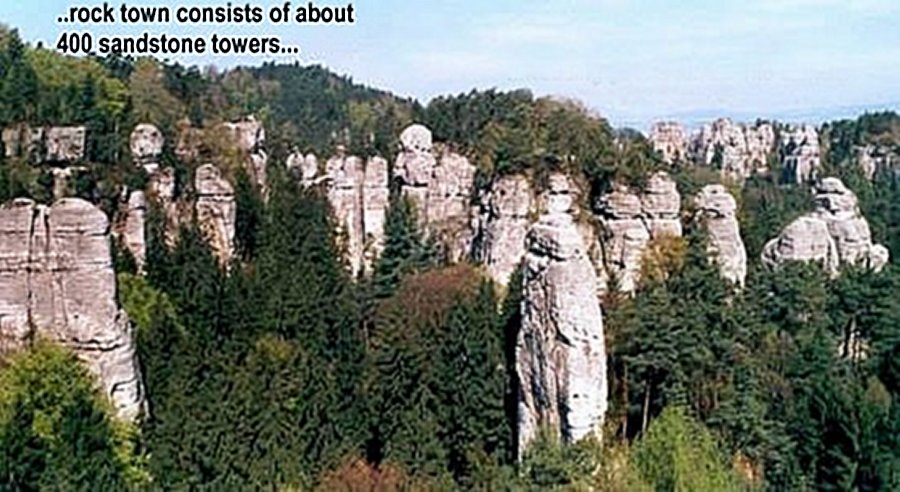 When you look at these rock shapes, what do you see? Give a chance to your imagination and let your fantasy flow in this rocky empire. Many of these rock formations are frightening and certainly ignite our imagination.

The rock cities  in Czech Republic are all of Mesozoic age and cover an area of 92 square km. They are situated at an altitude of 238– 488 m (780-1600 feet) above sea level. The structures of varying character represent different stages of development.

There are impressive and high rock towers reaching up to heights of 80-90 m and approximately 300 caves of all the fundamental types sculptured in siliceous sandstone. There are also gates, tunnels, cavities, niches, windows, balancing boulders and rock mushrooms.