David Tee - AncientPages.com - It was Herodotus who provided most of the information we have today about King Leonidas. According to the first Greek historian, King Leonidas descended from Hercules, the half god half man of Greek mythology.

What seemed like an unfortunate birth order, Leonidas was the third son of Anaxandrides. His father was a king who was forced to take a second wife in order to produce an heir. Leonidas finally was able to ascend the throne in 488 BC after the deaths of his father and two older brothers.

But the birth order may have been fortuitous as this mean that Leonidas was to attend the rigorous public school all non-first born sons were to attend.  In this school he received superior military training which prepared him unknowingly for future events.

At the time of his succession, Leonidas was married to the daughter of his half-brother King Cleomenes. Plutarch records the following exchange to demonstrate the character Leonidas held:

"When someone said to him: 'Except for being king you are not at all superior to us,' Leonidas son of Anaxandridas II and brother of Cleomenes replied: 'But were I not better than you, I should not be king.'’

The State Of Sparta

Many people may think that Sparta was a legendary empire but that would be far from fact. Greece was not a totally united country in the time of Leonidas. Each major city was called a city state and ruled their own lands and citizens.

There was a general co-operation between the different cities who would come together in times of war. But, they also quarreled and fought with each other as the Peloponnesian war attests.  Sparta is well known for being focused on military might and was known to keep slaves, which freed their natural citizens up for military duty.

The practice was that when a boy reached 7 years of age, he was taken from his home and placed in a military barracks. This new home provided them with a very rough up bringing in order to make them tough soldiers. It lasted for about 13 years or when the child reached the age of 20. 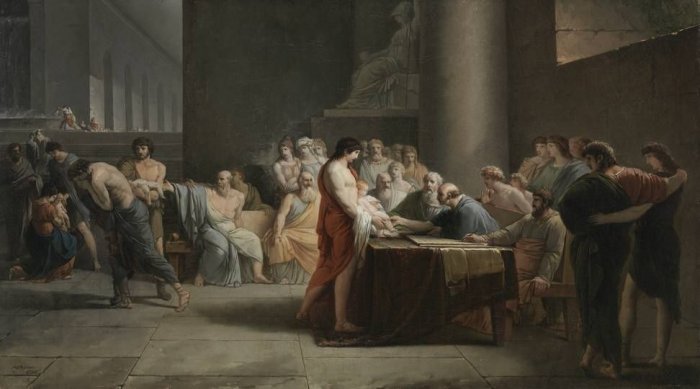 Jean-Pierre Saint-Ours, The Selection of Children in Sparta, 1785. A Neoclassical imaging of what Plutarch describes. Credit: Public Domain

One of the harshest facts to come out about this way of living was that the older citizens of Sparta would kill those boys who could not be trained due to a disability. The boys were thrown into a pit by the elders who judged the physical ability of each boy in question.  Not all were condemned to death, just the weakest ones.

Girls had it a lot easier and were not under the threat of death or removal of their homes. But they were expected to train, be athletic and compete in some competitions. Some even competed in the ancient Olympic Games’ chariot races.

It is estimated that Leonidas was about 60 at the time the Persian King Xerxes I invaded what is now known as Greece. The numbers involved in his army have been greatly exaggerated by different historians. Herodotus recorded the figure at 1 million while other estimates put the size between 80,000 and 150,000 Persian troops.

An exact estimate cannot be known today. The much smaller Greek army, numbering around 8,000 men from the different Grecian cities, did not let this disparity discourage or weaken them.

Before King Leonidas went to gather more troops and confront Xerxes, he went to the Oracle at Delphi. Here he was given a prophecy concerning the war. The Oracle claimed that either Sparta would fall, or the Spartan king would be killed.

When the two armies finally met, the Greeks took their position at Thermopylae, a very strategic mountainous area. Xerxes was hoping to spare a lot of bloodshed decided to wait four days before engaging the Greek army.

He also hoped that the size of his army would dishearten the Greek soldiers and they would flee. Neither happened and so Xerxes was forced to go to battle.

The Battle Of Thermopylae

Undaunted, the Greeks held their ground. Even after losing 2,500 men. But before they fell, the Greeks were able to kill roughly 20,000 Persians. Exact numbers may not be found.

As the story goes, it was a traitor to the Greeks that led the Persians through a mountain pass which took the Persians behind the Greek lines. Unable to defend two battle fronts King Leonidas dismissed most of his troops except for the 300 of legend and 700 hundred Thespians. 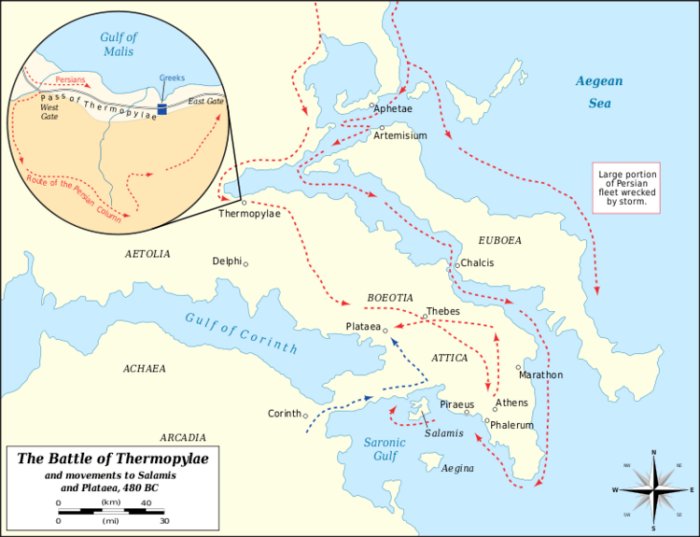 A map indicating the location and military positions taken in the Battle of Thermopylae in 480 BCE between the Persian invading forces of Xerxes I against a small Greek force led by Spartan king Leonidas. Defending the pass for three days, the Greek force was ultimately defeated. Credit: Public Domain

With this number King Leonidas stood his ground. Records show that this was not a forced choice, but one made out of the character Leonidas possessed. He decided to lose his life so that the rest of Sparta could live.

We all know the ending of that story as King Leonidas and his 1,000 men died heroically defending the land that they loved.

Sparta was not lost and on the death of Leonidas, his son Pleistarchus became King. Unfortunately, he was not old enough to rule on his own and Pausanius was appointed his regent.

Who Were The Hoplites And What Was Their Armor Composed Of?

A year later, these two were able to get revenge for the devasting loss at Thermopylae by winning two key victories against the Persians at Salamis and Plataea. Because of their eventual victory we are able to read about King Leonidas and his heroic men.

Although Sparta helped protect Greece from the Persian threat, things did not go well for Sparta after the war. Since Greek was still divided up into city states, there were a lot of conflicts and disagreements between the different cities.

These disagreements led to more battles and wars over the next 150 years or so. At one point Sparta made a financial alliance with their once enemy, the Persians. This helped Sparta defeat Athens but eventually the city state turned on their Persian backers and successfully attacked them.

Successive battles took Sparta from a great military power to a lesser city state who could not compete with the likes of Alexander the Great and the Roman legions.

T.D. van Basten - Ancient Greece: The Legacy of Leonidas I

Paul Cartledge - The Spartans: The World of the Warrior-Heroes of Ancient Greece