A. Sutherland - AncientPages.com - Agni is the fire god, represented as red and two-faced (sometimes covered with butter), suggesting both his destructive and beneficent qualities and with black eyes and hair, three legs and seven arms (rays). 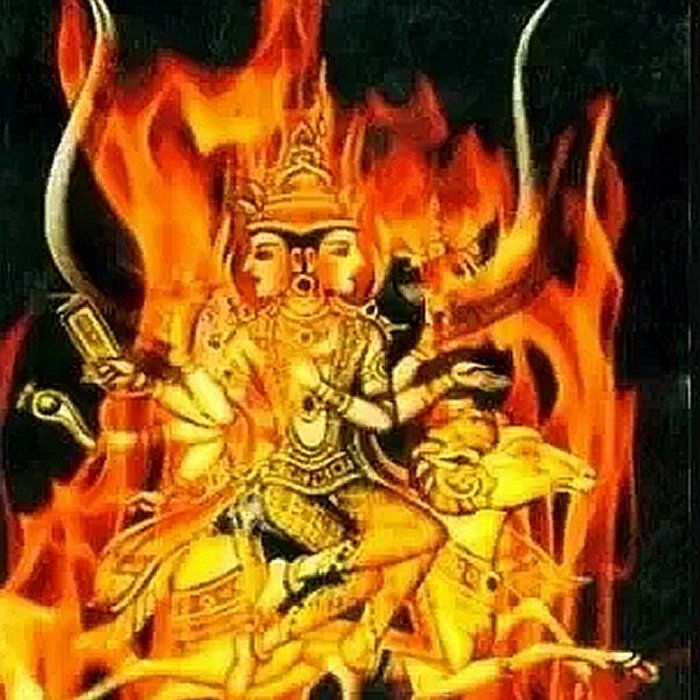 Agni rides a ram or a chariot pulled by goats or, more rarely, parrots. Seven rays of light emanate from his body. One of his names is "Sapta jihva" (‘seven tongues'). He is worshipped under a triple form: fire on the earth, lightning, and the sun.

Agni, lord of the fire and power of heat and light, has its origin in Vedic lore and is one of the most important divinities in the Hindu pantheon.

It is said that in the Rig Veda, the earliest Sanskrit text, there are more hymns dedicated to Agni than to any other divinity. Agni is the demi-god ruling fire, (in Latin: ‘ignis’, which is the root of English, ignite).

Agni (also known as Agnideva), is sometimes considered to be the son of earth and sky and sometimes he is called the son of Angiras, a Vedic rishi (sage) of Hinduism and a teacher of divine knowledge, and also a messenger between men and gods.

In the system of five elements of nature, which is found in Vedas, there are Earth (bhumi), Water (jala), Air (Vayu), Space (aakash) and Fire (agni). Agni is the purest element since you can never try to contaminate Agni because when you touch Agni, he will turn you into ash.

According to ancient Hindu beliefs, Agni dwelled in the two pieces of wood that could easily be transformed to fire when rubbed together. Therefore he represented a symbol of three powerful forces of nature – earthly fire, lightning, and sun.

Most popular among the fire gods, Agni was an important part of a home as the hearth fire, not only necessary for cooking food and heating water, but also served as the gathering place for the family.

He was considered a friend because his powers served people; he protected them, granted wealth and length of life. Agni was called upon always to take the gods to the ritual place so that they can hear praises of the chanters and their requests as well.

People have long celebrated the great god Agni (fire) during various festivals organized on a grand scale. One such beautiful festival of light is organized at Thiruvannamalai, Tamil Nadu.

However, Agni was not only associated with the hearth and earthly fire but also with sacrificial fire. It was later, he became much more as a purifier of sacrificial offerings rather than a fire god.

There is also yet another form of Agni, perhaps the most dangerous one. It is known as Vadavagni (literally Vadava-agni - “marefire”) and represents Agni’s most terrible form, which remains hidden deep under the sea. It’s waiting for the ‘right’ moment to destroy the world.

The Hindu scriptures mention an ancient belief that the escape of this fire from under the ocean which will, in the end, consume the current cycle of creation and prepare the universe for the next cycle of creation.

Later depictions of the god Agni show him in red or black color, with two faces, four hands, skin, which is red as fire flames, seven tongues for licking up the sacrificial butter, and a garland of fruit.

Another very interesting depiction of Agni shows him as Marut (immortal), one of the Hindu storm gods equipped with a flaming spear and riding in a chariot with wind instead for wheels and drawn with beautiful fiery horses.

Agni’s cult disappeared long ago but the ancient ceremonies associated with the fire still remain, keeping in mind the Hindu great deity – Agni, who grants immortality, purifies sinners after they died.

Also, participants of the funerals and wedding ceremonies never forget to call upon Agni.