AncientPages.com - Pax Sinica (in Latin:"Chinese peace") was similar in its meaning to Pax Romana, and it applied to the period of peace in East Asia, maintained by  social, cultural, ideological, or economic influence of China.

The Pax Sinica is considered the Chinese version of the Romans' Pax Romana, a period of relative peace and stability across the Roman Empire which lasted for over 200 years. 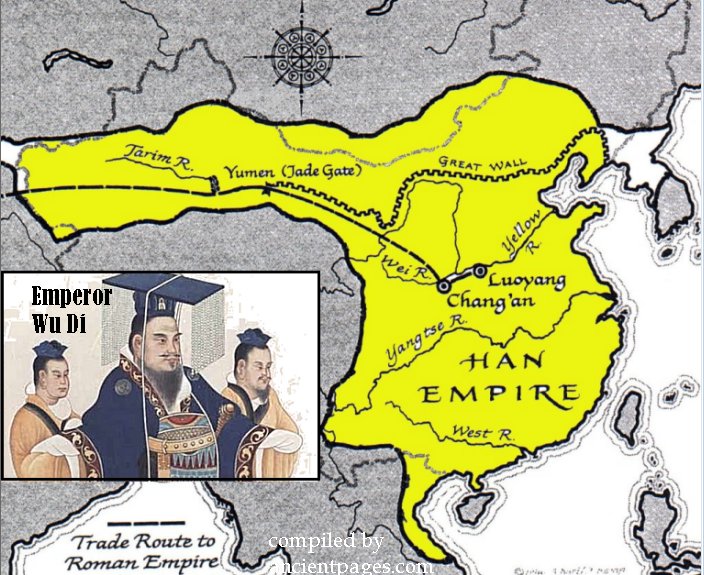 When the high-ranking emperor of Han, Liu Pang (202 – 195 BC) founded the Han Dynasty in 202 BC, the Chinese began to experience a 400 year period of peace, known as the Pax Sinica.

It had various ways to manifest itself but it first of all concentrated on some basic innovations that were of great importance for the country.

The Han rulers established a strong central government formed of carefully chosen candidates instead of members of the royal family.

The government had to work in the people’s interest. It helped and protected the Chinese citizens, mainly by peace and prosperity.

Among several introduced innovations was the storage of remaining food during times of plenty and selling it during difficult times. It stabilized both prices and feeding the public.

During this time, the Great Wall of China was built, the long-distance travel and trade, which was used to trade silk, spices, and tea with the Roman Empire, also prospered on the Silk Road.

During the Pax Sinica, several developments of the Han Dynasty took place such as the civil service, the first papermaking process was documented in China during the Eastern Han period (25–220 AD). In 140 BC, the land expanded due to conquests of Korea, Manchuria, and Vietnam by Han emperor, Han Wudi.

After the Han Dynasty ended in 220 AD, the Pax Sinica continued during a period of the next six dynasties (the Western Zhou, Tang, Western Han, Eastern Han, Ming, and Qing dynasties), which lasted for over 350 years.

As we said, the Pax Sinica introduced by Han dynasty of China coincided with the Pax Romana of the western world by Rome.