AncientPages.com - It’s not easy to find footprints from the last Ice Age in an area that is today covered by dense forest, but archaeologists have discovered as many as 29 human footprints of at least three different sizes.

Radiocarbon dating reveals the footprints are around 13,000 years old and they shed new light on human occupation in Canada.

The finding is important because it adds to the growing body of evidence supporting the hypothesis that humans used a coastal route to move from Asia to North America during the last Ice Age. 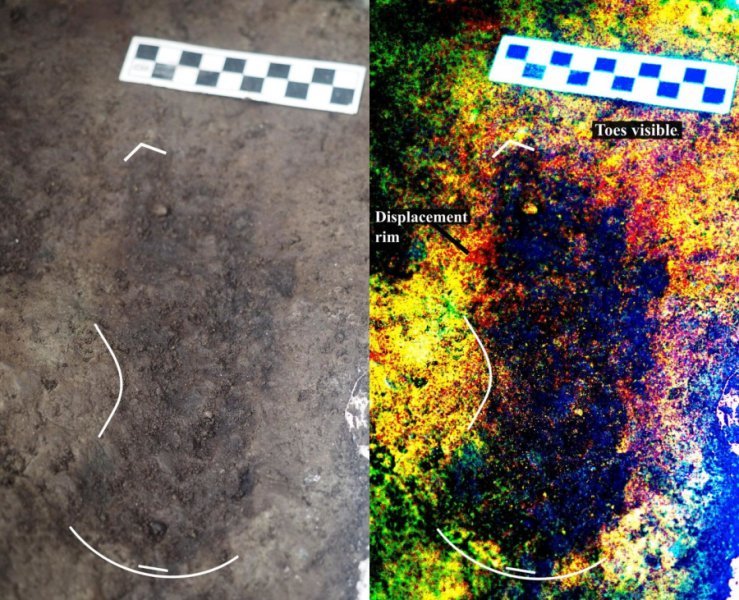 Photograph of track #17 beside digitally-enhanced image of same feature using the DStretch plugin for ImageJ. Note the toe impressions and arch indicating that this is a right footprint.
Credit: Duncan McLaren CC-BY

Previous research suggests that, during the last ice age (which ended around 11,700 years ago), humans moved into the Americas from Asia across what was then a land bridge to North America, eventually reaching what is now the west coast of British Columbia, Canada as well as coastal regions to the south.

In this study, the research team excavated intertidal beach sediments on the shoreline of Calvert Island, British Columbia, where the sea level was two to three meters lower than it is today at the end of the last Ice Age.

The discovered footprints probably belonged to two adults and a child, all barefoot. The findings suggest that seafaring people were present on the west coast of British Columbia about 13,000 years ago, as it emerged from the most recent ice age.

Scientists say that further excavations with more advanced methods are likely to uncover more human footprints in the area and would help to piece together the patterns of early human settlement on the coast of North America.