Ellen Lloyd - AncientPages.com - Early Christians used many secret symbols and one of them was known as the Ichthys. Named for the Koine Greek term for fish, this ancient symbol consists of two intersecting arcs, the ends of the right side extending beyond the meeting point. The symbol was simply made in the image of a fish.

So, why would early Christians use secret symbols in the first place and why was one of them resembling a fish?

The answer to the first part of the question is not difficult to answer, but the true meaning of the fish symbols is still a question of debate.

The first 300 years after Jesus’ death Christians were persecuted in the Roman Empire. To avoid being killed for their faith, early Christians used secret codes that showed the way to a Church and many secret symbols protected believers of Christianity.

The Sistine Chapel Cypher – Secret Messages In The Art Of Michelangelo

For example, if a Christian met a stranger, he could draw an arc on the ground. If the stranger completed the image with another arc so it formed a fish, they would both know they were Christians. This was a clever way to distinguish friends from foes. The Ichthys symbol also used to mark meeting places, tombs and reveal the road to secret churches. On June 13, 313 AD, Edict of Milan was signed by Roman Emperor Constantine and the persecution of Christians ended.

The Fish Is A Sacred Christian Symbol

The Ichthys symbol became of great in importance and started to appear in Christian art during the late 2nd century, and its use spread widely in the 3rd and 4th centuries.

There are many reasons why Christians considered the fish sacred. The fish appears in many Biblical stories and the animal has different symbolic associations. For example, the fish that swallowed Jonah is believed to symbolize Christ’s incarceration in the tomb. The story of Tobias, who survives an attack by a large fish and then uses the gall of the fish to restore his blind father’s sight, symbolizes God’s blessings.

The story “Feeding of the 5,000”, also known as the "miracle of the five loaves and two fish" told in the Gospel of John describes how five barley loaves and two small fish supplied by a boy were used by Jesus to feed a multitude. 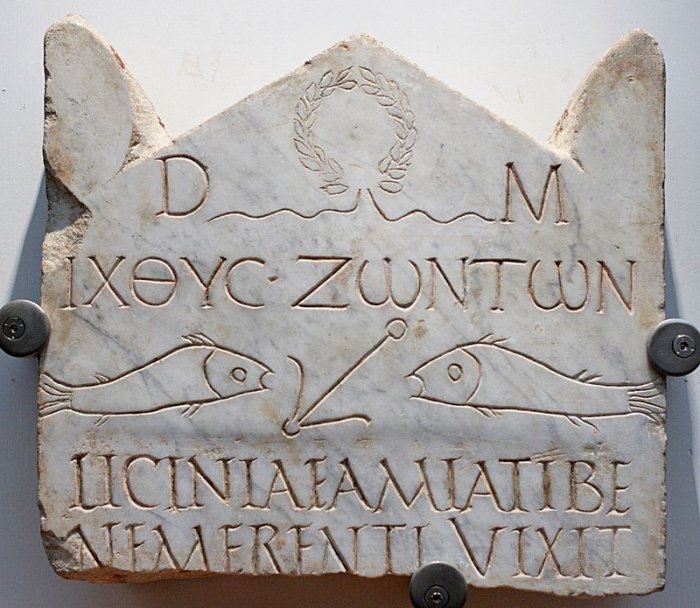 Some Biblical scholars maintain that the meanings ascribed to the fish symbol are so numerous and varied that it is impossible to identify a central explanation. The biggest uncertainty is whether the symbol of the fish is meant to denote faith in Christ or Christ himself.

Returning back to the subject of how people took advantage of signs and symbols to protect themselves, we should not forget that secret Christian symbols were not only used in ancient Rome. Many Samurai had swords with secret crucifixes and hidden Christian symbols to avoid persecution.