AncientPages.com - Thousands of years ago, there was a mysterious European culture known as the Vinca culture. These people left a legacy in form of valuable artifacts covered with an unknown, never successfully deciphered script. The Vinca culture produced one of the world's earliest writing systems.

This enigmatic culture flourished from about 6000 BC to 3000 BC and was named Vinca-Tordos Culture of Yugoslavia and western Romania. It derived its name from the village of Vinca located on the banks of Danube river, only 14 km downstream from Belgrade.

As Ancient Pages reported previously, since the language of the Vinca still remains undeciphered, and the unearthed artifacts constitute the only source of knowledge about this culture.
A team of Bulgarian archaeologists excavating near ear Nova Zagora have discovered a 7,000-year-old inscription covered with Vinca script.

According to researchers the find is the oldest in Europe. The signs are laid on both sides of a well-preserved ceramic tile. "This plate is a high form of information transmission and is very complex," archaeologist Dr. Tanja Kaneva said. 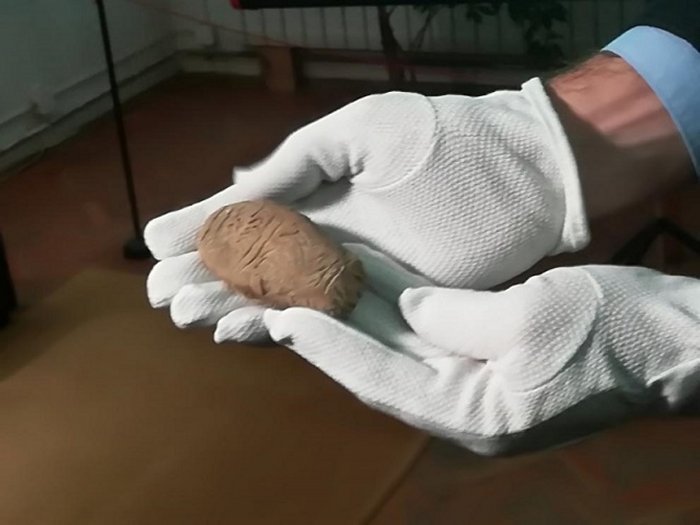 The nature and purpose of the symbols is a mystery. Although attempts have been made to interpret the symbols, there is no agreement as to what they might mean. Artifacts covered with Vinca symbols were first discovered in 1875 at Turdas, Romania.

Mystery Of The Controversial Cascajal Block – Oldest Writing In The Americas

In 1908, archaeologists came across objects covered with the same script in Serbia. Since then thousands of Vinca inscriptions have been discovered in the same region. The oldest of the finds, known are the controversial Tartaria tablets which were discovered in 1961.
The inscribed tablets were examined by a number of scientists from all across the world and isotope carbon 14 dating revealed they were created at least 6,500 years ago.

The tablets covered with pictographic writing are extraordinary because they raise the possibility that writing in the Danube basin predated the earliest Sumerian cuneiform and Egyptian hieroglyphics.
This suggests that the Tartaria tablets represents the first writing in the world, which we know of. Needless to say that this discovery caused great interest and controversy in the scientific community.

The tablets which are 1,000 years older than the Mesopotamian writings contain signs that have remained undeciphered until this day.

probably represent the earliest form of writing ever found and predating ancient Egyptian and Sumerian writing by thousands of years.
Since the inscriptions are all short and appear on objects found in burial sites, and the language represented is not known, it is highly unlikely they will ever be deciphered.

They differ from pictograms and carry non-verbal information accessible to people living at that time. They carry information about calendar and ritual events. They are hand-made on wet clay, with the marks being painted with a sharp object.