One of them is a rare artifact in form of decorated bison bone, and the other is a fragment of a human skull; both are dated to the end of the last Ice Age.

The analysis of both finds showed they are over 13,000 years old and, as such, form the oldest art from the North Sea and the earliest known modern human from the Netherlands.

The 13,000 - 13,500 year-old bison bone, carved with zigzag and herringbone motives, was fished from the North Sea, south of the Brown Bank. It was given as a long-term loan to the National Museum of Antiquities by a private collector. The piece is a fragment of a metatarsal with a striking zig-zag decoration on five panels.

It is the earliest piece of art to come from the North Sea.

Only three other similarly carved objects have been discovered so far: a horse’s jaw in Wales, deer antlers in Northern France and moose antlers in Poland.

According to prehistory curator at the Leiden museum Luc Amkreutz, the carving is ‘very precise to start with but a bit haphazard towards the end, as if the person doing the carving lost interest.’ 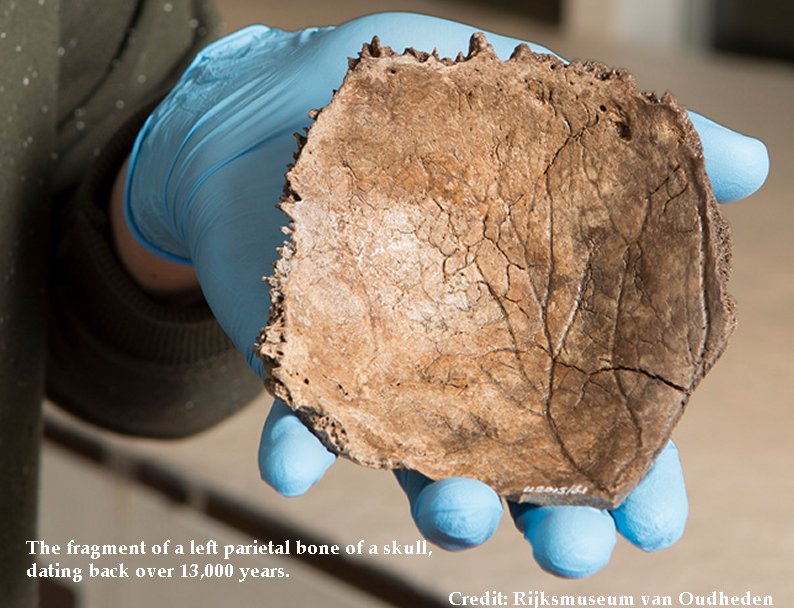 The function of the artifact remains unknown but possibly it was a ritual object or a handle of a tool.

“Some have interpreted the zigzags as symbols of movement, rhythm, water or a need for symmetry. ‘But we will never really know,’ Amkreutz said.

Another artifact is the 'oldest Dutchman', a fragment of a left parietal bone of a skull also dated more than 13,000 years. was found by fishermen near the Dutch coast, south of the dredged navigation channel known as the Eurogeul.

It is one of the earliest examples of Homo Sapiens remains found on Dutch territory. The scientists have also found tiny indentations which may point to anaemia or a lack of vitamins, which would lead to scurvy or rickets.

Now, researchers will search for DNA in the skull fragment so more tests can be done.

"Findings from the North Sea used to be discarded because they lacked context, Amkreutz said. "But by careful dating and researching the material we can show that the objects are interesting in themselves."

Research is published in Antiquity.