Ellen Lloyd - AncientPages.com - About 7,500 years ago, a giant meteorite slammed into the Earth, carving out a hole 110 m across on Estonia's largest island, Saaremaa.

Several kilometers above the Earth’s surface, the meteorite broke into pieces from the pressure and heat of the atmosphere. When the meteorite pieces hit the ground, there was an explosion that can be compared to a small nuclear bomb. The landscape changed completely and the blast created eight smaller craters nearby. The are is today known as the Kaali Meteorite Crater Field. 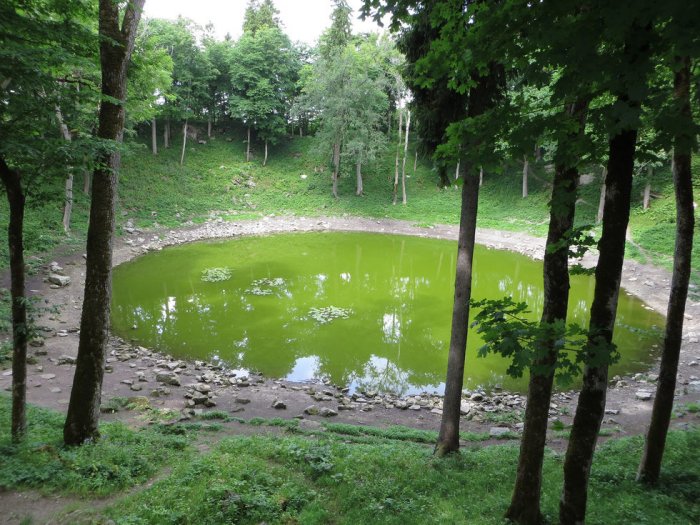 Kaali crater  - A green pool of water at the largest of the meteorite craters at Kaali on Saaremaa island in Estonia. Credit: Brostad - Flickr

Ancient people considered objects that fell from space to be sacred. The Kaali crater and its lake became therefore a sacred site for centuries.

A Bronze Age cult built a large stone wall around the largest of the Kaali craters. The ancient ruins of this immense stone wall are still there today.

Archaeological evidence reveal that Kaali Lake, also known as Holy Lake was a place of offering for many centuries. The nearby forest is still called Puhamets, which means "Sacred Forest." There is no doubt this place was of great spiritual importance to our ancestors.

The stone wall surround the crater is interesting. The length of the wall was about 470 meters, its width around 2.5 meters and its height to two meters.

Hill Of 100,000 Crosses In Lithuania Survived Against All Odds

Stones 1.5 to 1.8 meters in diameter were used in its construction and the wall is stronger than any similar structures in the region. While excavating the site, researchers found evidence of a fortified settlement inhabited from the 5th to 7th century BC, a small hoard of silver jewelry from the 3rd to 5th centuries AD, and piles of domestic animal bones, some dating to as late as the 17th century.

Scientists think ancient offerings still remain undiscovered at the bottom of the six meter deep Kaali lake. Offerings continued to be made in secret long after the Church forbade such "pagan " practices.

Silver ornaments have also been found that date to 300-500 A.D. It is therefore very probable that the lake was considered holy, and offerings were made there for centuries. 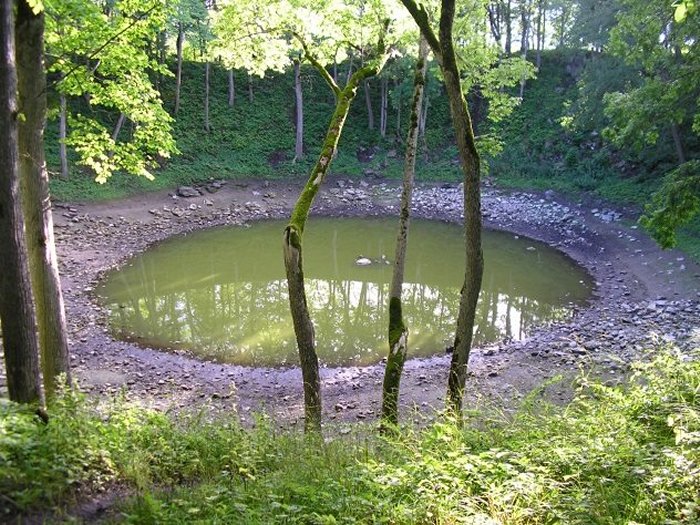 Unfortunately, deposits of oak trees in the water prevent exploration of the lake. Scientists cannot probe beyond four meters below the surface and we may never know what lies at the bottom of Kaali Lake.

The Holy Lake has been mentioned in many Estonian legends and is a subject of folklore. Lennart Georg Meri ,(1929-2006), writer, translator, film-maker, diplomat and politician, President of Estonia in 1992 - 2001, wrote in his book Hõbevalge" (Silverwhite) that he had  found descriptions of the meteor's fall to earth in archaic runes. Kalevala 47 runo does indeed give a very realistic description of fire falling from the sky that burned houses, fields, fens and humans.

Meri also suggested that the Baltic Jaanipaev (Midsummer) bonfire traditions are a reenactment of the event. There is no evidence of this, but Kaali crater is a  popular tourist destination today and we still don’t know what is hidden at the bottom of the lake.