Ellen Lloyd - AncientPages.com - In most countries, children await the arrival of St. Nicolaus or Santa Claus who will bring them gifts. In Italy children eagerly count the days to the coming of La Befana on Epiphany, the Twelfth Night of Christmas. La Befana is a good broomstick riding witch who delivers gifts to children.

La Befana has been an Italian Christmas tradition at least since the eighth century is celebrated every year on January 6. 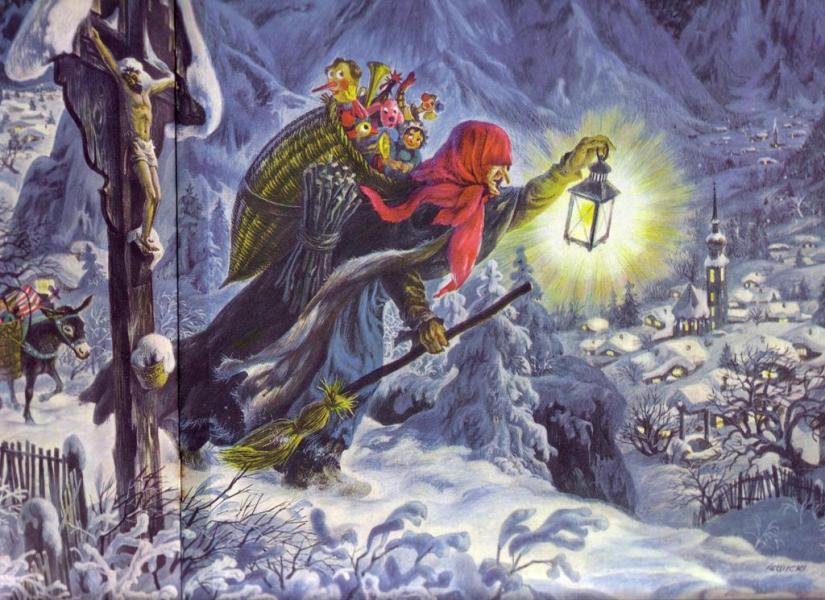 The witch reminds of Baba Yaga, an enigmatic and powerful mythological figure in Slavic folklore. Both women are old, dressed in rags and a pointed hat and have a crooked nose. However, that’s where the similarities end. While Baba Yaga was bribing children, La Befana gave them gifts.

It is said that La Befana is often accompanied by a black cat or a flock of birds.

According to the legend, La Befana was approached by the Biblical Magi, also known as the Three Wise Men a few days before the birth of Jesus Christ.

The Three Wise Men had seen the star in the sky (today known as the Bethlehem star) and wondered if La Befana could tell them how to find the Son of God, but the witch did not know the directions.

Being the best housekeeper in the village she provided them with shelter for the night. The Biblical Magi stayed in her humble but cozy cottage and the next morning they invited her to join them on the journey to find the baby Jesus.

The witch said she couldn’t because she was busy cleaning her home, but after the Three Wise Men had left, she changed her mind.

She quickly filled a basket with gifts for the baby Jesus and went trying to find the Biblical Magi and the newborn child. But although she followed the same star she couldn’t find the baby Jesus.

So, to this day, La Befana is still searching every house for the child, leaving toys, candies and chocolates for the good children and just coal, onions or garlic for the kids who misbehaved.

The name Befana is closely related to the date of the holiday - etymologically it comes from the Greek epiphaneia hiera '(Festival of Revelation), Latin. epiphania, and Epiphany in Italian, which later passed over in Beffania to remember Strega di Beffania (the Witch of the Holy Revelation).

The feast of the Epiphany, the Epiphany, is celebrated by the Catholic Church on January 6, in Italy, it is the day that marks the end of the Christmas and New Year period.

For this reason, the figure of Befana is symbolically interpreted as the personification of the old year that ends after Christmas and is the reason why gifts are delivered.

The Befana is celebrated throughout all of Italy and has become a national icon. There are festivals in her honor and Urbania is thought to be her official home.