Ellen Lloyd - AncientPages.com - Today we associate mistletoe with Christmas. We decorate with mistletoe and don’t think much about how this wonderful plant entered our homes.

To many of us, mistletoe is simply one of many Christmas traditions, but the use of the remarkable plant started a very long time ago. 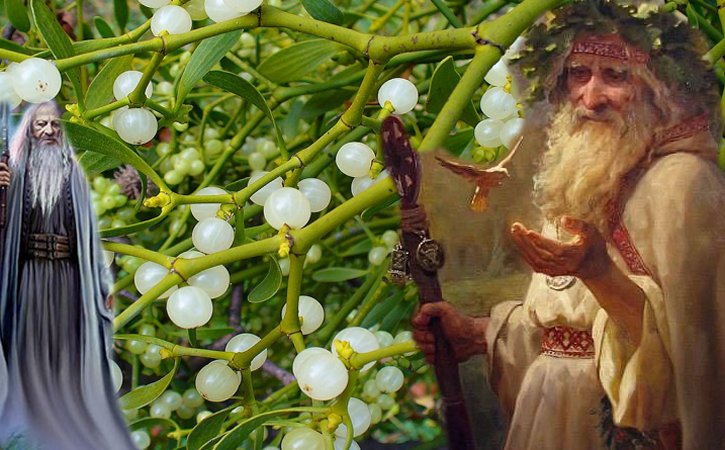 Mistletoe is an evergreen plant with white berries that can be found growing in trees in North America and Europe.

The origins of mistletoe as decoration may lie in the ancient belief that it protected against thunder, lightning and warded off evil spirits.

During the Middle Ages, branches of mistletoe were hung from ceilings to ward off evil spirits.

In Europe, they were placed over house and stable doors to prevent the entrance of witches.

People believed mistletoe possessed mystical powers that could bring good luck to a family during December.

Why Mistletoe Was Sacred To Ancient People

In ancient times mistletoe was regarded as a miracle plant and it was sacred to the Celts, the Norse, and the North American Native Americans. Mistletoe is known to stunt the growth of its host trees, and can even kill them if it gets too big.

It may sound strange that a parasite, a plant that literally sucks the life out of another living organism, could inspire such awe, but the mistletoe is unique and much different from most of nature’s other parasites.

This beautiful, flowing plant flourishes at a time when all other living creatures fight for life. Its growth cannot be controlled, nor, it seems, can the plant be eradicated. It seems to grow out of nothing and yet appears to be everywhere.

Pliny the Elder, the Roman philosopher and naturalist, wrote that the Celts used the plant as an antidote to poison and to increase the fertility of their cattle. In the Celtic language, mistletoe means "All Heal".

In Norse myths and legends, mistletoe is described as the only thing that could kill god Balder, the son of God Odin and brother of God Thor.

The plant had healing properties and it’s only normal that ancient people considered it sacred. It has been used as an herbal remedy in Europe and among Native Americans for hundreds of years.

In modern times, it is still an ingredient in some homeopathic medicines and scholars test the plant's medical use. It has been used to treat epilepsy, apoplexy, palsy, tuberculosis, stroke and even cancer.

According to Norse mythology, God Balder was killed by a mistletoe arrow, his mother Frigga wept white berries which brought him back to life.

In Norse mythology, the mistletoe was a symbol of love and friendship and that is where the custom of kissing under mistletoe comes from.

Mistletoe was also a Druidic symbol of joy and peace.

The hanging of mistletoe and the custom kissing beneath it is a popular tradition in Christmas celebrations.

When you bring the plant to your house don’t forget that mistletoe is one of the most magical, mysterious, and sacred plants of all time.

Ace Collins - Stories Behind the Great Traditions of Christmas

David McLaughlan - The Top 40 Traditions of Christmas: The Story Behind the Nativity, Candy Canes, Caroling, and All Things Christmas