AncientPages.com - Angkor Wat in Cambodia is a remarkable ancient place of great historical and archaeological importance.

There is still so much we do not know about this temple complex and the largest religious monument in the world. 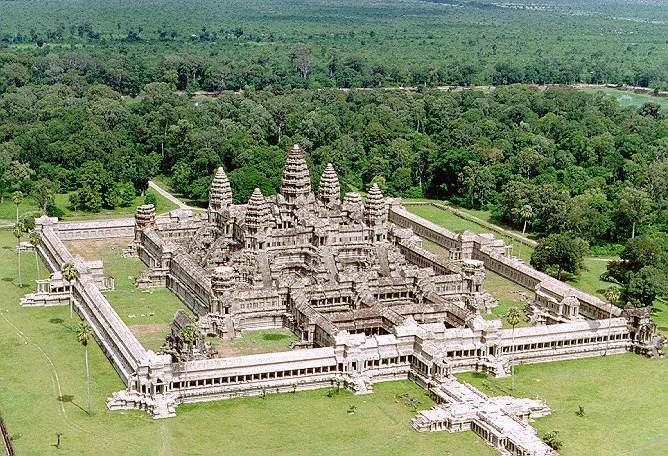 Not long ago, archaeologists discovered that the site was much larger and more complex than previously thought. Scientists found a previously unknown, ancient and massive spiral structure as well as several buried “towers”. The function of the spiral structure and the “towers” remains a mystery.

Now, archaeologists announced they have come across a 1.9-meter (6-foot, 3-inch) tall, 58-centimeter (23-inch) wide statue while excavating near the site of a hospital from eight to nine centuries ago. 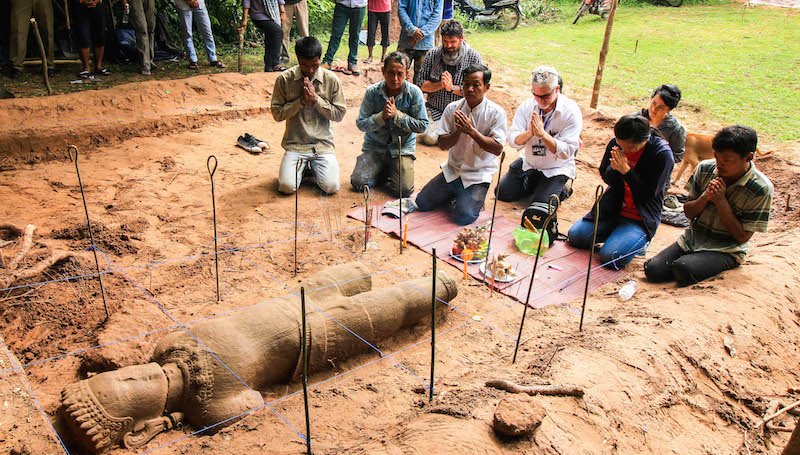 The archaeology team holds a religious ceremony on Sunday to ask the spirit protecting the site permission to move the statue they unearthed the previous day to the Preah Sihanouk Museum in Siem Reap province. (Apsara Authority)

According to the Aspara Authority, there were 102 hospitals built by the 12th century King Jayavarman VII. Hospital complexes consisted of wooden structures, which have since decayed and disappeared, and stone chapels. Four hospitals in the area that had been previously identified are recognizable by temple gates opening toward both the east and west.

The statue, found buried 40 centimeters (16 inches) under the ground is believed to be from the 12th or 13 century. It is very likely it was a symbolic guardian of the entrance of the hospital.

The statue is well-preserved, weighs 440 pounds and the government organization that manages Angkor Park, described the find as "something that only happens in the movies."

“We were very surprised to find this,” said Im Sokrithy, an archaeologist with the Apsara Authority, the government organization managing Angkor Park, and the dig’s scientific supervisor. 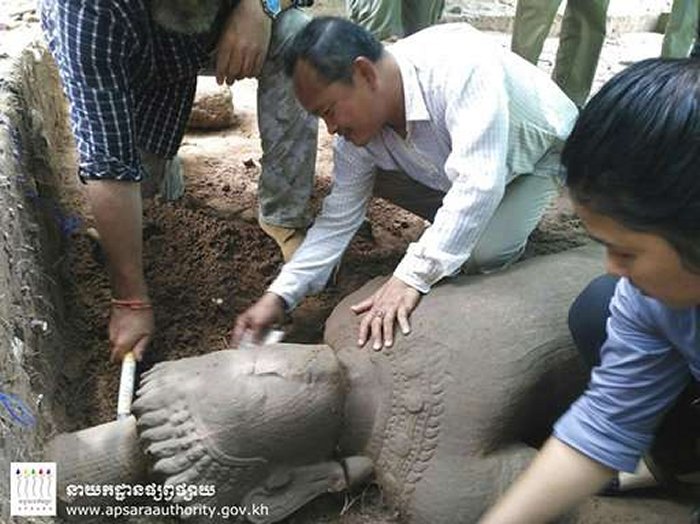 The sandstone statue is missing its feet and parts of its legs. Had it been whole, it would have stood at least 2.1 meters.

The hospital is one of the 102 that the 12th century king is believed to have built throughout his Angkorian empire, said Tan Boun Suy, deputy director-general for the Apsara Authority.

“Jayavarman VII’s reign was truly remarkable in terms of social programs,” he said. “The hospital consisted of wooden buildings and a chapel erected in stones. What is left is the chapel…as wooden structures have long disappeared.”