AncientPages.com - While excavating in the ancient Egyptian city of Elkab, archaeologists have uncovered several previously unknown rock inscriptions, which include the earliest monumental hieroglyphs dating back around 5,200 years.

These new inscriptions are of great significance because they shed new light on the history of the ancient Egyptian writing systems.

“This newly discovered rock art site of El-Khawy preserves some of the earliest — and largest — signs from the formative stages of the hieroglyphic script and provides evidence for how the ancient Egyptians invented their unique writing system, Egyptologist John Coleman Darnell, professor in Yale's Department of Near Eastern Languages and Civilizations at Yale said. 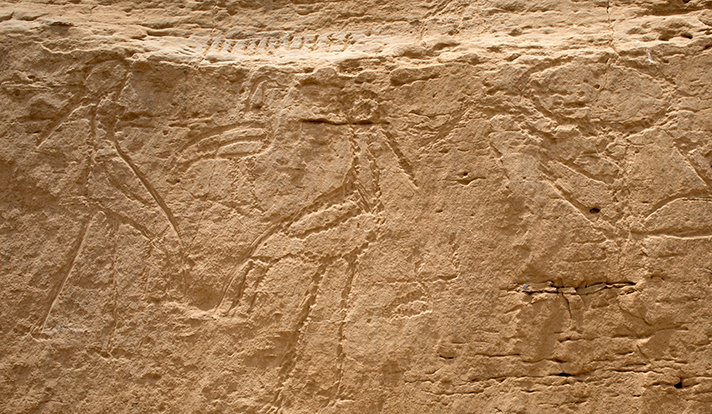 The newly discovered panel of signs features images of a bull’s head on a short pole followed by two back-to-back saddlebill storks with a bald ibis bird above and between them. This arrangement of symbols is common in later Egyptian representations of the solar cycle and with the concept of luminosity. Image credit: Yale University

What is extraordinary about this discovery is the large number of inscriptions scientists can study now. There are several unique elements that offer valuable insight into the minds of ancient Egyptians and their concept of the world and cosmos.

“These individual hieroglyphs each measure just over a half meter in height, and the entire tableau is about 70 centimeters (27.5 inches) in height. Previously found signs were only one or two centimeters in size,” Darnell said. 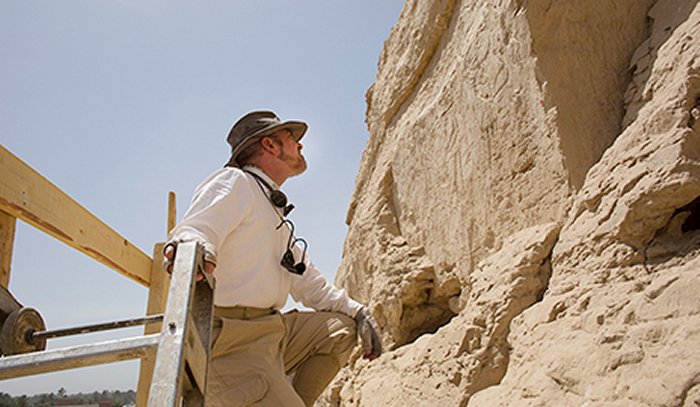 The researchers also discovered rock art depicting a herd of elephants that was carved between 4,000-3,500 B.C.E. One of the elephants has a little elephant inside of it, which, according to Darnell, “is an incredibly rare way of representing a pregnant female animal.”

The archaeologists also identified a panel of four signs, created circa 3,250 B.C.E. and written right to left — the dominant writing direction in later Egyptian texts — portraying animal images of a bull’s head on a short pole followed by two back-to-back saddlebill storks with a bald ibis bird above and between them. The arrangement of symbols is common in later Egyptian representations of the solar cycle and with the concept of luminosity. “These images may express the concept of royal authority over the ordered cosmos,” says Darnell.

These discoveries reveal that there was not a slow development of writing primarily for bureaucratic use as previously believed, but that hieroglyphic writing was more geographically widespread and topically diverse at the time of or shortly after its development. 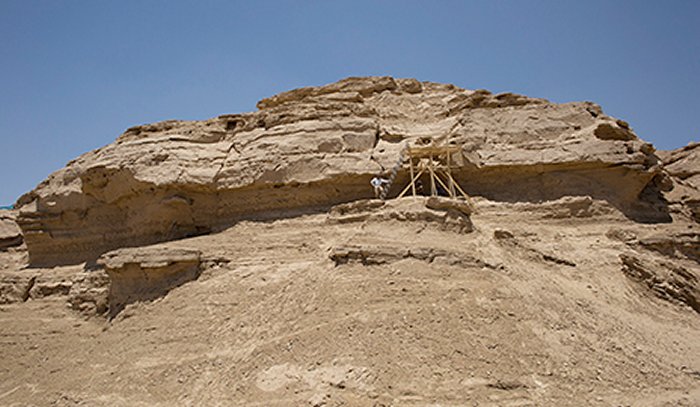 The site of the inscriptions is near two important cities in ancient Egypt. Image credit: Yale University

“This also suggests that there is a much more expansive use of the early writing system than is indicated from other surviving archaeological material,” Darnell explained.

Using digital technology, researchers created a series of 3D images of the inscriptions from photographs taken in the field.

“This new technology makes it possible to record sites at a level of accuracy and detail that was absolutely impossible before,” says Darnell, adding, “It also means that we can record the site as a place, or a location, and not just as a series of inscriptions.”

“This was not what I was expecting to find when I set out on this period of work on the expedition,” says Darnell. “It was completely shocking to me.”

What is also intriguing is that the ancient Egyptian inscriptions were not randomly placed. They were carved on rocks, along long major roads, either roads that parallel the Nile or roads that head out into the desert.

They are usually at a juncture or crossroads. “Any place where someone might pause in their journey,” Darnell said.