A. Sutherland - AncientPages.com - EN.KI ("Lord of Earth"), was the Sumerian water god of Eridu, located in the southern wetlands of what is today Iraq.

He was also the god of wisdom, creator, protector of humanity and the patron of craftsmen and artisans.

Enki was known under other names, such as the Akkadian-Babylonian, Ea ("Whose House Is Water") or NU.DIM.MUD (Nudimmud), "He Who Fashions Things". He was wise and skillful at all crafts; he was a brilliant scientist, geneticist and engineer.

Along with Anu, the god of heaven, his brother Enlil, the god of air, and Ninhursag, the earth mother, Enki was one of the most powerful gods of the Sumerian pantheon.

In myths found on Sumerian texts, Lord Enki is described as “he of exceptional knowledge, who knows the divine powers in heaven and earth, who from his own dwelling already knows the intentions of the gods…”

Enki is associated with the city of Eridu in the southern Mesopotamia. In Sumerian mythology, Eridu (E.RI.DU - ‘Home in the Faraway Built’) was one of the earliest and most sacred cities of the Sumerians. Enki was worshiped at Eridu and there he had his his temple, E-abzu (‘house of the abzu’), which was also known as E-engur-ra (‘house of the subterranean water’).

In Mesopotamian art Enki is represented as a seated god with long beard, who wears a cap with horns and a long robe. Streams of water flow from his arms to the ground, sometimes with fish swimming along the flow, which symbolizes the subterranean waters of the abzu. 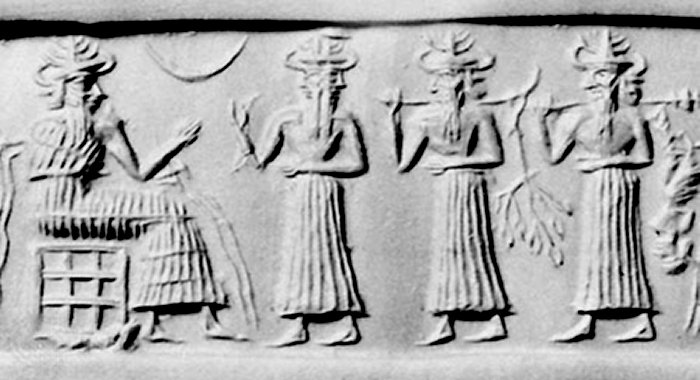 According to the Babylonian creation epic, the 'Enûma Elish', taken from the library of Assurbanipal (c 630 BC), Enki  lived in abzu (Akkadian apsû) with mythical creatures, such as the seven meditators who were created to teach humanity and Isimud (Ismus), a messenger god with two faces looking in opposite directions, who was the servant of Enki. The abzu, which was a magic place full of divine powers, was frequently visited by gods who wanted to steal some of Enki’s powers.

Pre-Flood City Of Eridu That Belonged To Enki, God Of Creation, Intelligence, Wisdom And Magic

The great god Enki was not a ruler himself but gave rulers what they needed most – knowledge and intelligence and he divided the speech to humans.

And so the ancient Sumerian texts say:

“Enki, the Lord of abundance, of trustworthy commands,

The Lord of wisdom, who understands the land,

The leader of the gods,

the Lord of Eridu

Changed the speech in their mouths, [brought] contention into it,

Into the speech of man that had previously been one…”

Enki created fertile lands and cities of Mesopotamia. He created fish in rivers and wild animals in the steppes. He provided seeds of wheat, bean, and barley and raised corn on the fields. He created sheep and cowsheds, brought civilization to humankind and taught humans how to construct canals and plan temples, ‘putting their foundation pegs in the right places.

Enki sitting in the Abzu.

Enki is mentioned in a great number of ancient myths that originate from Southern Iraq to the Levantine coast; we mention only a few of them. In the myth “Adapa and the South Wind”, Enki (Ea) helps humanity keep the gift of magic and incantations and according to the Sumerian epic poem entitled “Inanna and Enki”, he was the one who dedicated the art of writing to the people of earth and he was the keeper of the divine powers called "Me", the gifts of civilization and he controlled them.

In the Sumerian myth “Enki and the World Order,” Enki is said to have fixed national boundaries and assigned gods their roles. It is also mentioned that the Anunnaki several times, they ‘do homage’ to the god Enki and sing his praise, they ‘take up their dwellings’ in the midst of the people of Sumer, in the cities and in the countryside and twice it is said that they ‘decree the fates of mankind…’

Leick, A Dictionary of Ancient Near Eastern Mythology