A. Sutherland - AncientPages.com - These artifacts are very controversial because they appear to be much too advanced for their time.

Approximately 200 metallic spheres in size from 2.2 to 10 cm, were found in a silver mine in the eastern Transvaal Ottosoal, South Africa.

Why were they found only in South Africa?

"Over the past several decades, South African miners have found hundreds of metallic spheres, at least one of which has three parallel grooves running around its equator," Michael Cremo wrote in his great book "The Hidden History Of The Human Race". 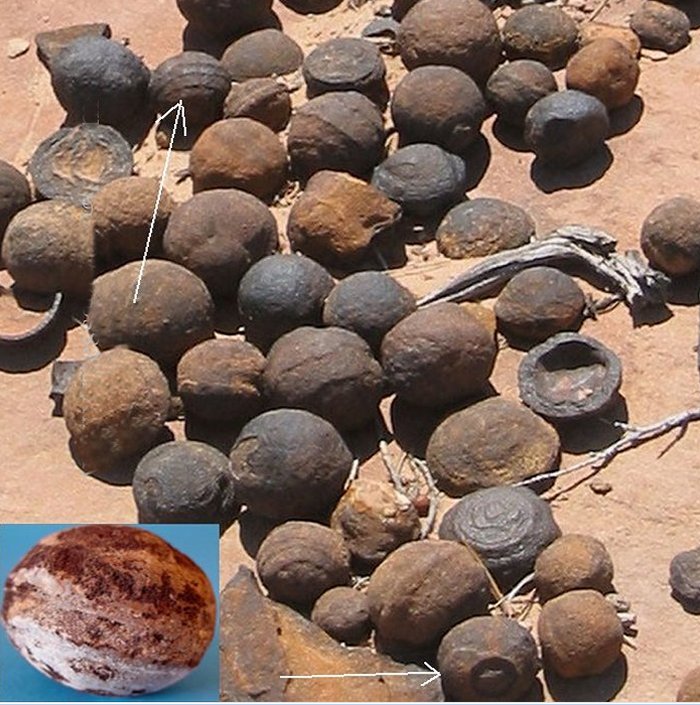 According to an article by J. Jimison "Scientists Baffled By Space Spheres" (1982), the spheres are of two types - "one of solid bluish metal with white flecks, and another which is a hollow ball filled with a white spongy center".

"The spheres are a complete mystery. They look man-made, yet at the time in Earth's history when they came to rest in this rock no intelligent life existed. They are nothing like I have ever seen before."
"There is nothing scientific published about the globes, but the facts are: They are found in pyrophyllite, which is mined near the little town of Ottosdal in the Western Transvaal.

This pyrophyllite is a quite soft secondary mineral with a count of only 3 on the Mohs' scale and was formed by sedimentation about 2.8 billion years ago. On the other hand the globes, which have a fibrous structure on the inside with a shell around it, are very hard and cannot be scratched, even by steel," Roelf Marx, curator of the museum of Klerksdorp, South Africa, where some of the spheres are housed, replied in a letter dated September 12, 1984. 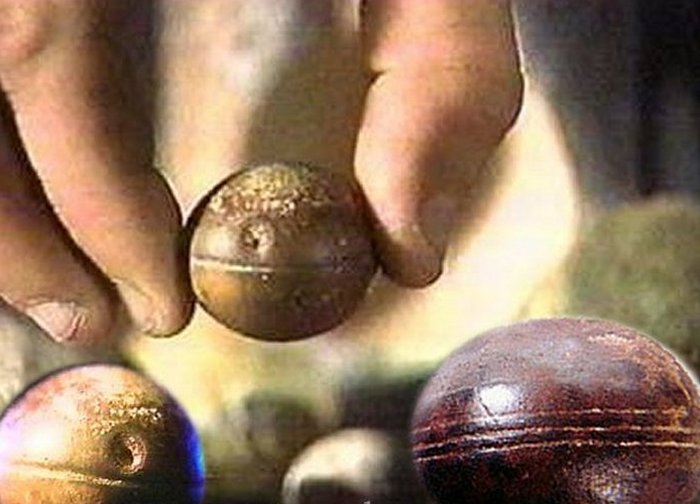 The Mohs' scale of hardness is named after Friedrich Mohs, who chose ten minerals as references points for comparative hardness, with talc the softest (1) and diamond the hardest (10).

According to the opinions of A. Bisschoff, a professor of geology at the University of Potchefstroom, "limonite concretions".  Limonite is a kind of iron ore.

"A concretion is a compact, rounded rock mass formed by localized cementation around a nucleus."
"One problem with the hypothesis is that the objects are limonite concretions concerns their hardness... The metallic spheres cannot be scratched with a steel point, indicating they are extremely hard," Cremo continues.

But standard references on minerals state that limonite registers only 4 to 5.5 on the Mohs`scale of hardness, indicating a relatively low degree of hardness.

Furthermore, limonite concretions usually occur in groups, like masses of soap bubbles stuck together. They do not, it seems, normally appear isolated and perfectly round, as is the case with the objects in question. Neither do they normally appear with parallel grooves encircling them.

"In the absence of a satisfactory natural explanation, the evidence is somewhat mysterious, leaving open the possibility that the South African grooved sphere - found in a mineral deposit 2.8 billion years old - was made by an intelligent being," Cremo concludes.

If the spheres from Klerksdorp were artificially created and are of extreme ancient origin then, what could be their purpose?
It has been suggested that may have represented a sort of ammunition, a form of ancient records, talismans, information storage devices, a kind of extraterrestrial surveillance and even a "signal" from outer space.

These are, however, only ideas and guesses; without more knowledge and examination the South African metallic spheres will not help us to piece together our past history.