Thalia Lightbringer - MessageToEagle.com - Nefertiti, the most powerful woman of her time, is now a symbol of ancient Egypt. What do we know about her life? Why did she suddenly disappear after being elevated to near-equal status by King Akhenaten?

Nefertiti - The Beautiful One

“Nefertiti” is translated as “The Beautiful One Has Come” but the word “nefer” means more than just beauty. It can also be translated as “goodness” and “perfection”. Egyptian hieroglyphs have layers of meaning. There must also have been more to Nefertiti’s than beauty, or she would not have been shown as such a beloved and powerful figure, the equal of the king in all things. 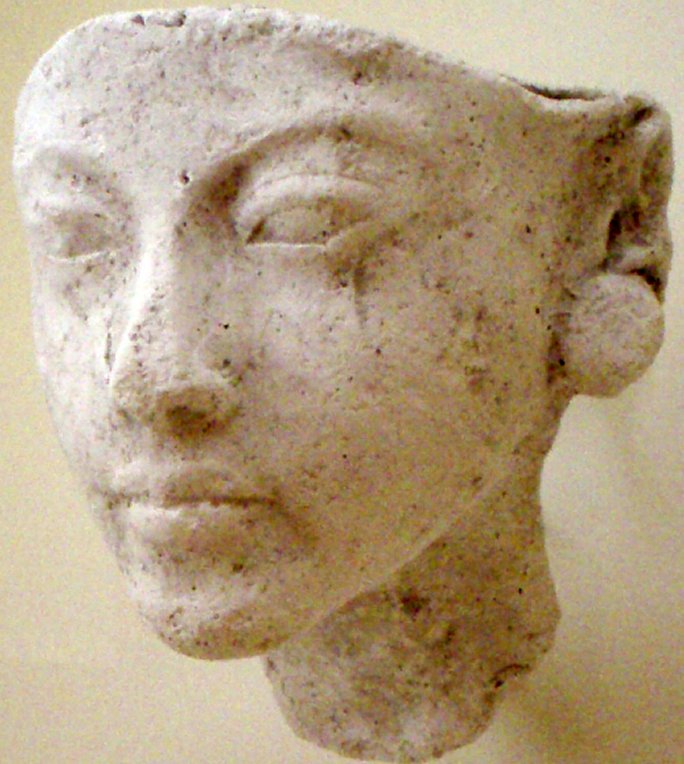 Nefertiti has become an icon of beauty the world over since her bust was recovered from the sands of Egypt. She is a legendary figure, almost as symbolic of Egypt as the pyramids of Giza. But this was not so for the ancient Egyptians!

After the end of Akhenaten’s reign, there was a systematic attempt to erase all trace of him and his supporters from memory. Queen Nefertiti was not spared. She was just as controversial, shown in some scenes driving her own chariot, or acting as a warrior, not usual things for women.

Nefertiti was of the eighteenth dynasty, fourteenth century BC. Some think she was the daughter of Ay, brother to Queen Tiye, wife of Amunhotep III. However, DNA evidence from the mummy believed now to be Nefertiti says otherwise. It also shows she was not the sister or cousin of Akhenaten. Some think she may have been a foreign princess, perhaps Tadukhipa of Mitanni.

Akhenaten’s father broke with tradition, moving the capital from Memphis to Thebes and marrying Tiye, a commoner. Akhenaten continued to break tradition by changing the religion to a monotheistic cult of the Aten. 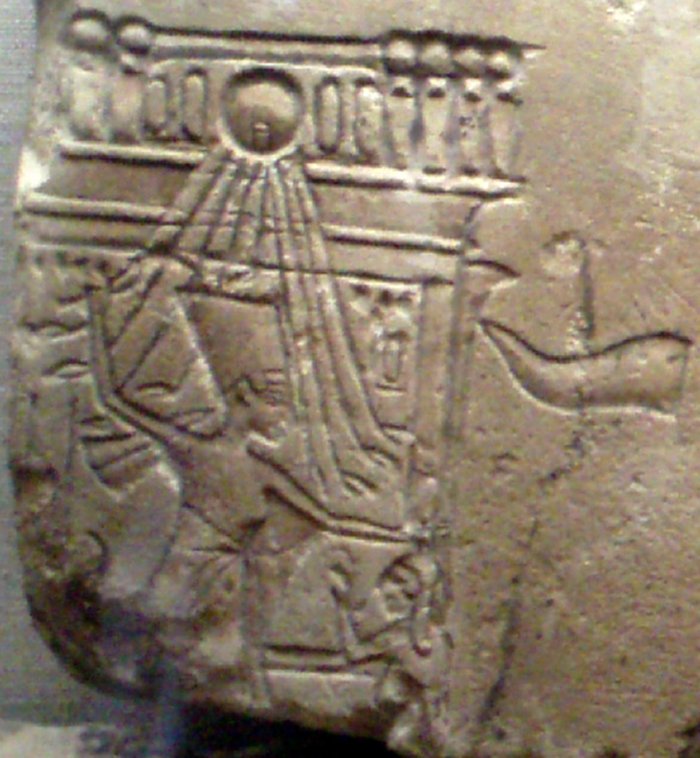 After Nefertiti became a supporter of the Aten, she changed her name to Neferneferuaten ("beautiful and good is the perfection of Aten”) Egyptian rulers had many names and titles. Some of hers that we know are: Lady of Grace, Sweet of Love and Lady of all Women. She must have been very loved because Nefertiti had six daughters by Akhenaten! Nefertiti is portrayed as the king’s closest companion. In year 12 of his reign, at a huge public celebration, she is shown as his co-regent.

Smenkare then appeared from nowhere, taking the place of Nefertiti at the end of Akhenaten’s rule and ruling for about 3 years afterward. Plague struck the city in the 13th year of Akhenaten’s reign, even spreading to the royal palace. In the year 14 of Akhenaten’s reign, Nefertiti vanished. Maybe Nefertiti died from the plague, as some have theorized, but the fact that she is shown in place of the protective goddesses on the four corners of Akhenaten’s sarcophagus suggests otherwise and could be evidence she performed the “Opening of the Mouth” ceremony that the Egyptians believed gave immortality, generally done by the heir to the throne.

Akhenaten died in year 17 of his reign and was buried in a tomb 4 miles from Amarna which faced the rising sun. Nefertiti was supposed to have been buried in this same tomb, but the chambers prepared for her there were never used and left unfinished, whereas Akhenaten’s part of the tomb was finished. 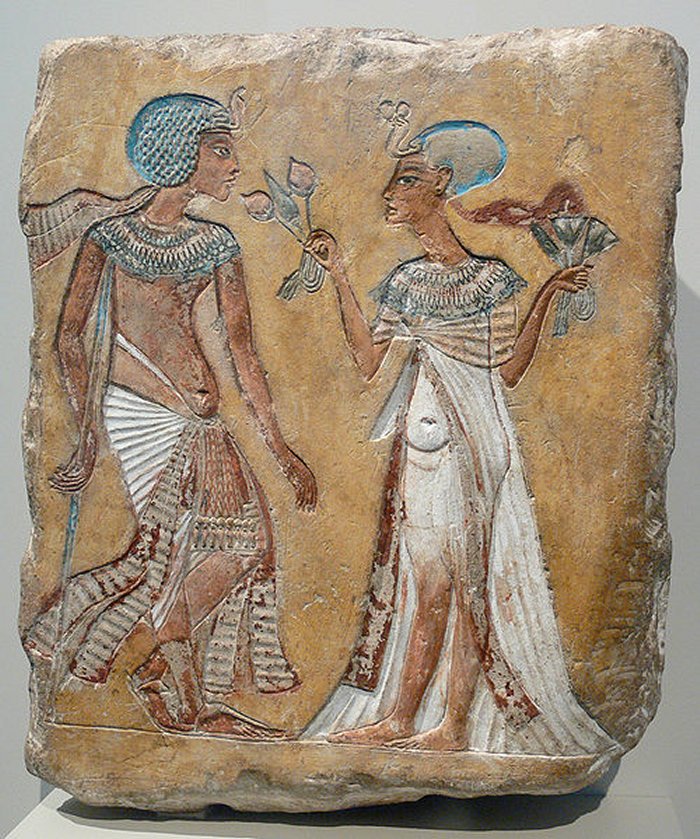 This image is commonly taken to be Smenkare and Meritaten, though it may be Tutankhaten and Ankhesenpaaten. Image credit: Wikipedia

Smenkare as shown in the art seems a very effeminate man and has features like Nefertiti’s. Many scholars now believe that Nefertiti was in fact Smenkare, assuming this role to solidify her position as co-ruler. Queen Hatshepsut is also shown as a male with the royal beard in some portrayals. Nefertiti was always shown as a strong and powerful queen, but appearing as a man could convey strength to the people.

Nefertiti (or Smenkare) was on shaky ground as soon as Akhenaten died. Though a supporter of the Aten, the new ruler soon decided it was wise to embrace the old traditions once again. Akhenaten’s body was taken from his tomb, moved to the Valley of the Kings when the royal family moved back to Thebes. The temples were reopened and the priests of Amun restored. However, it does not appear to have been enough. Smenkare only reigned for about a year after, and there are indications of foul play surrounding the death.

In 1999, Marianne Luban published a web article called, “Do We Have the Mummy of Nefertiti?” which postulated that one of a trio of unidentified mummies found in a walled-up chamber of KV 35 (KV=King’s Valley) could be Nefertiti. This mummy was initially thought to be a young man, but later analysis of the remains show it to be a female whose body was severely mutilated after death. The face and chest were hacked open and the right arm torn off.

Though she never mentioned Marianne’s work, causing quite a controversy by this and not revealing her true purpose in studying this mummy, Egyptologist Dr. Joann Fletcher came to all the same conclusions after scientific tests, as well as finding the missing right arm. After DNA tests, Zahi Hawass also confirmed the mummy's identity as Nefertiti.

It seems that someone was so angry at this person that they would deny them entrance to the afterlife by making it impossible for the deceased to speak its name to the gods and obtain immortality in the afterlife.

Though mysteries remain about Nefertiti’s life, it seems the question of where she disappeared to has been answered! It is likely she became known as Smenkare, trying to rebuild the lost faith of the people, only to meet her end shortly after in a violent manner.

The tests done on the mummy in KV 35 show that she received a knife wound in the side shortly before death, and then after death was further mutilated. As much as possible, all traces of her were obliterated from the histories and the monuments. However, those who wanted her forgotten failed. Nefertiti did not remain in obscurity and is now one of the most famous figures of ancient Egypt, her name spoken everywhere.