Ellen Lloyd - AncientPages.com - In order to survive or win a battle, Viking warriors were expected to master a fight with and without weapons.

This led to the development of a martial arts system called Glima that was practiced by men and women of all ages. The tradition of Glima has been kept alive and the sport is still very popular in Scandinavia.

A Viking warrior had to be able to fight with or without weapons. Image credit: Viking Martial Art Academy

Glima Was Practiced By Vikings And Norse Gods

Glima is mentioned in Old Norse texts. In the Prose Edda, in the book of Gylfaginning one can read how the Norse God Thor took his journey to Utgards-Loki and was defeated in a wrestling match by the female jötunn Elli (Old Norse “Elli” means “old age”). 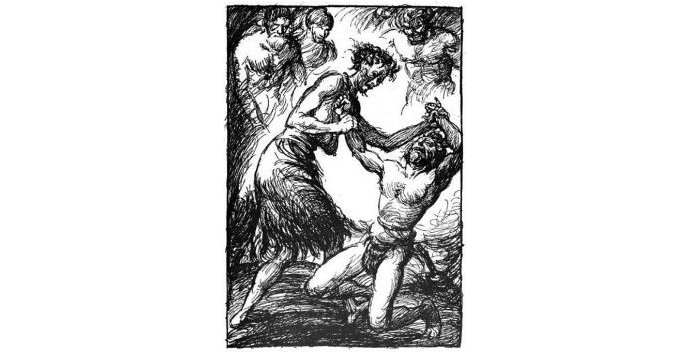 A depiction of Elli wrestling Thor (1919) by Robert Engels.

It might seem odd that mighty God Thor was defeated by an old woman, but she was skilled in the martial art of Glima.

But Thor was also familiar with Glima. Glima was so important for Viking society that their most popular god, Thor, was also the god of wrestling.

The word Glima in Old Norse means glimpse or flash.

Due to a lack of historical written records, it’s difficult to determine when Glima became a popular ancient martial art.

What is known is that according to the Jónsbók law book from 1325 AD., original Norwegian settlers in Iceland brought Viking wrestling and the Glima combat systems with them to the island.

Glima is also mentioned in the Icelandic medieval book of laws known as Grágás (Gray Goose Laws), which refers to a collection of earlier Norwegian laws, there were rules for wrestling.

Combat Glima - Lausatok (Løse-tak) was used in mainly used by Viking warriors for self-defense and combat. 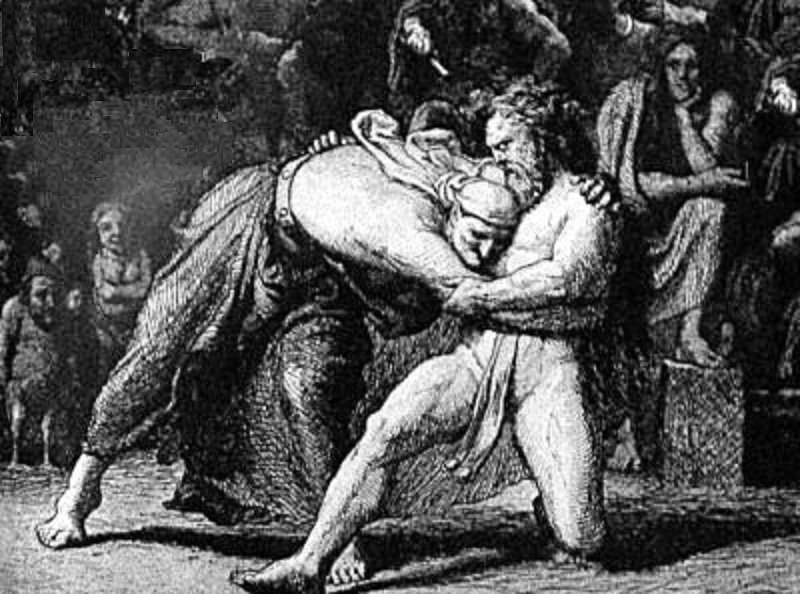 It is still possible to learn combat Glima and the martial art style includes throws, blows, kicks, chokes, locks, pain techniques, and weapon techniques. Many experts consider combat Glima to be comparable with the best complete martial arts systems from around the world.

Sport Glima was in ancient times practiced by men, women, and children. It was a popular and most widespread sport in the Viking Age.

The most popular style in Iceland and Sweden is Brokartök. It’s Iceland’s national sport.

Scientists specializing in experimental archaeology have studied ancient Viking battle techniques and discovered a completely new Viking fighting style. The results of the study revealed that Vikings used their shields much more than previously thought. Thought the Viking shields were constructed for defense purposes, it turns out that they were also an effective attacking weapon.

A combination of Glima and certain shield techniques made Vikings excellent warriors who could not be easily defeated. As previously mentioned in an article om AncientPages.com, there are many reasons why Viking raids were successful.

The Vikings were very skilled navigators with excellent knowledge of the coasts of Europe and they planned their raids very carefully. Vikings had very sophisticated ships, called longships. The strength, maneuverability, and speed of the longship gave the Vikings vital key advantages.
But longships and navigations skills are not enough to win a battle. Vikings’ combat techniques were based on martial art such as Glima.

Jana K. Schulman - Jo´nsbo´k: The Laws of Later Iceland; The Icelandic Text According to MS AM 351 fol. Ska´lholtsbo´k eldri