Ellen Lloyd - AncientPages.com - Shaka Zulu will be remembered as a great leader and conqueror who united over 100 chiefdoms into one mighty kingdom.

He was one of the greatest military leaders of all time and many consider him a very brutal ruler who trained his troops with severe discipline and questionable methods. According to historians, there are many stories about his life and some of them are exaggerated.

Yet, there is no doubt that he is considered a great man and one of the most famous of Africans. Shaka the Mighty is often compared with Alexander the Great, Julius Caesar, Attila the Hun, and Napoleon.

Born c. 1787, Shaka Zulu had a difficult childhood and was discriminated. His father, Senzangakhona was minor Zulu chief, but his mother was an unranked woman. His parents belonged both to the same clan and their marriage violated Zulu custom.

Shaka was just a boy when he and his mother were banished from their tiny Zulu clan, one among many clans that dotted the hillsides of southern Africa. He dreamt of becoming a great warrior and he achieved his dreams. Shaka served as a warrior under Dingiswayo, the Mthethwa paramount chieftain and he became a mighty warrior of the Mthethwa Empire.

When the Zulu leader was murdered by a rival clan, Shaka assumed the throne, but he remained a vassal of the Mthethwa Empire until Dingiswayo's death.

When Shaka learned Dingiswayo had been murdered by Zwide, powerful chief of the Ndwandwe (Nxumalo) nation, he sought vengeance. He organized the remaining warriors of the Mthethwa together with other tribes and defeated Dingiswayo during the Zulu War in 1819-1820. 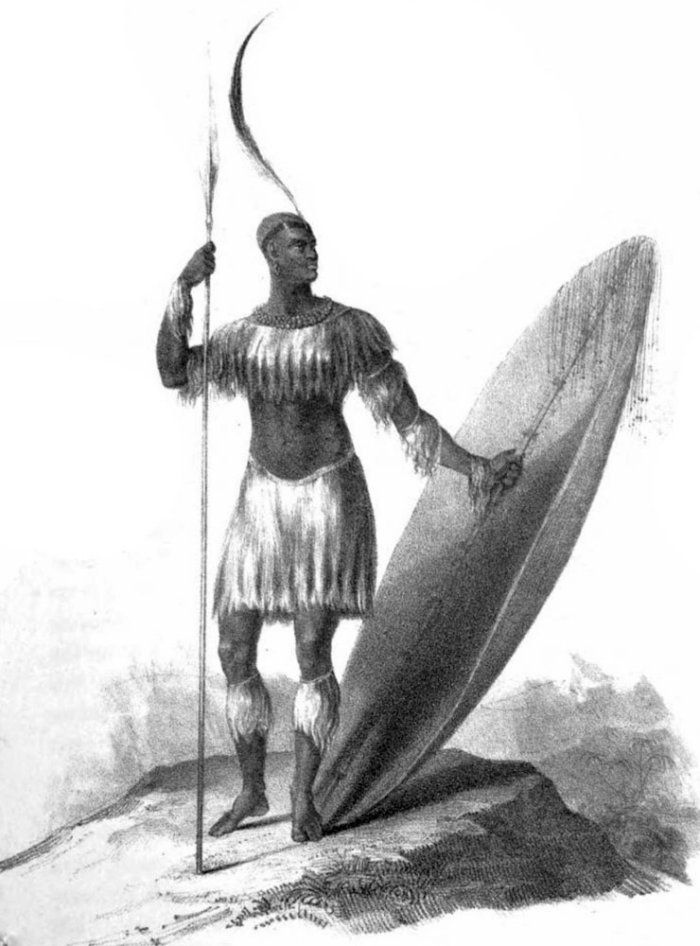 The Zulu belonged to a large ethnic clan called the Bantu. These were migratory, cattle-keeping people composed of many subgroups speaking over 200 related languages. The Bantu had gradually moved from the North into the Eastern portions of South Africa.

It was Shaka who united the tribes and formed a powerful state in 1818. This became the Zulu Kingdom.

Shaka Zulu did not become a great military leader immediately it took time before people trusted him, but as he created alliances with other tribes, his name became widely recognized.

He used his own soldier skills to teach the Zulus the most effective way of becoming powerful quickly was by conquering and controlling other tribes. His teachings greatly influenced the social outlook of the Zulu people. The Zulu tribe soon developed a "warrior" mindset, which Shaka turned to his advantage.

He also introduced new weapons to his warriors. One of them was the ikwla, a weapon with a shorter sphere and a longer spearhead the ikwla resembled a sword and gave the Zulu warriors great advantage in combat with their enemies. Shaka prohibited the wearing of sandals, toughened his warriors' feet by making them run barefoot over rough thorny ground and in so doing secured their greater mobility. His warriors had to run many miles daily and those who complained were killed.

Shaka was a very strict leader and his training was very demanding and brutal, but he gained a lot of respect, confidence, and support. He eliminated privilege and class. Warriors had to earn their positions and rank. All the spoils of war taken from the defeated armies were to be split among the warriors, and all resources shared. Aging members of society were to be treated with dignity and allowed to retire. He also got rid of witch doctors.

Shaka and his Zulu warriors used a famous and very successful battle tactic known as the “Buffalo Horns”. There is no doubt that this tactic played a vital role in military success.

Previously the Zulu warriors had only used the “Buffalo Horns” tactics for hunting, but Shaka adapted it for battle with great success. The Buffalo Horns formation would see the Zulus split their forces into four distinct elements. Each represented a part of the Buffalo such as the chest left and right horns. The Chest of the Buffalo would engage the enemy head-on. This element of the Zulu force would usually be made up of the best warriors, proven in battle.

While the Chest of the Buffalo was pinning down the enemy, the Horns would encircle them to the left and right, surrounding the opposition. Any survivors were given the option to join the Zulus or be killed. This tactic was the main reason the Zulu warriors became feared.

Shaka maintained a good relationship with the Europeans in Africa, including the Colonial authorities. However, his constant wars were disliked by other Africans, including his own people.

Shaka Zulu became psychologically unstable and obsessively worried about being replaced by an heir. When his mother died in 1827, his mental condition became worse than ever. He imposed a year of celibacy on his people and executed anyone who did not show enough grief at the death of his mother and about 7,000 Zulus were killed during his grief. 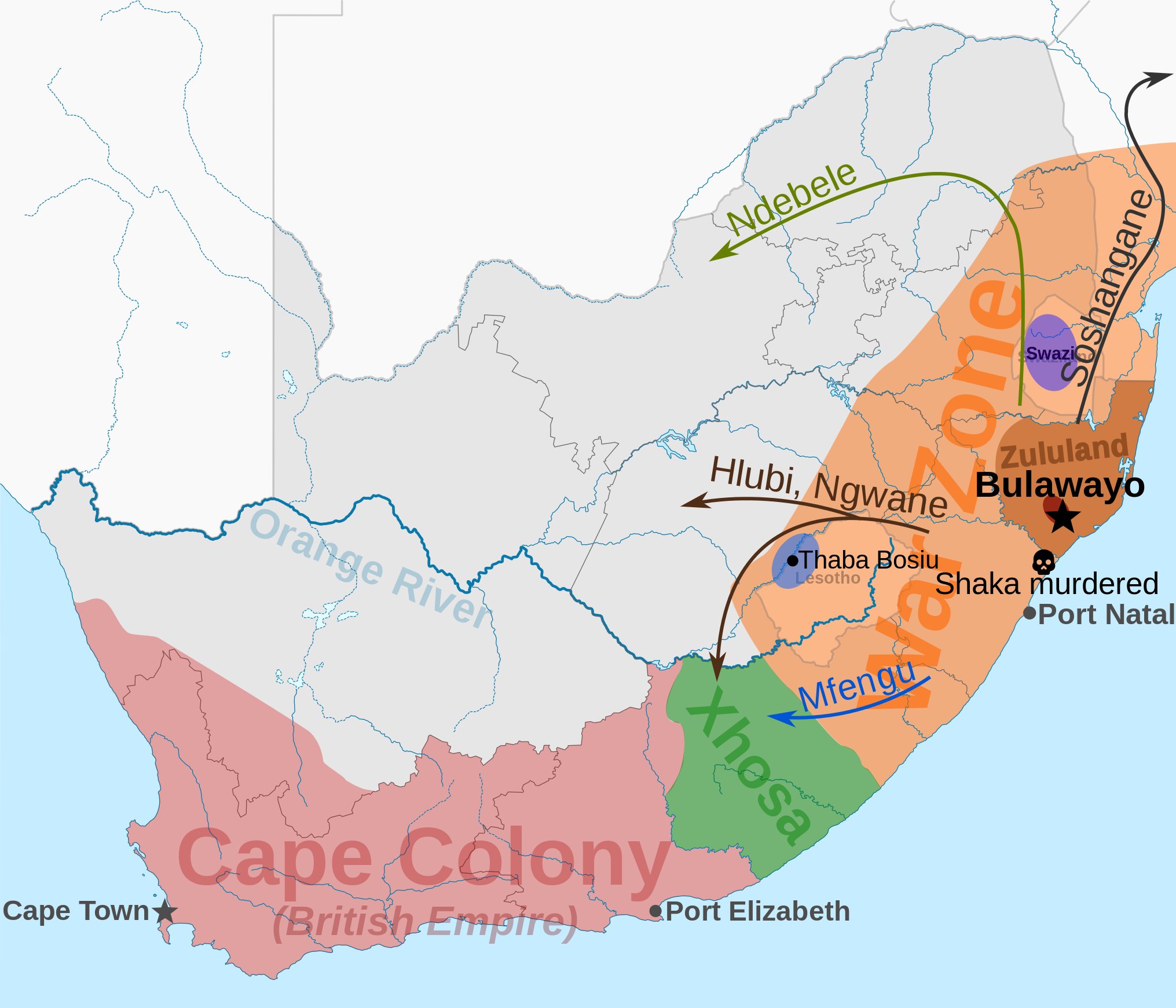 For a year no crops were planted, milk was prohibited and all women found pregnant were slain with their husbands.

Shaka wanted everyone to know how it felt to lose a mother.

All this was too much for the people around him. One year later, in 1827, Shaka was murdered by his half-brother, Dingane, who succeeded him as ruler.

Today, Shaka remains a revered founding figure for many Zulu-speakers and continues to be seen as an important historical figure by very large numbers of other people.

E. A. Ritter - Shaka Zulu: The Biography of the Founder of the Zulu Nation

Dr Alex Coutts - Shaka The Story of a Zulu King