AncientPages.com - On November 4, 1922, British archaeologist Howard Carter discovered King Tut’s tomb in Luxor’s Valley of the Kings. The tomb was intact and packed with antiquities including Tut’s world-famous golden mask.

Carter’s interest in ancient Egypt was born when he was still a young boy and one day saw his father paint a portrait of a famous Egyptologist.

King Tutankhamun lies in a golden sarcophagus in his burial chamber in the Valley of the Kings. Image credit: The Japan Times

At the age of 17, Carter began to work; his father had found him a job as an artist for an archaeologist.

Soon thereafter, in 1891, he traveled o Egypt and started to explore ancient sites. He became very good in improving the methods of copying tomb decoration.

Carter worked for many years under different archaeologists at sites including Amarna. Then, he was employed by Lord Carnarvon, a wealthy English aristocrat who was very interested in ancient Egyptian history.

Carter started excavating, but after some years Lord Carnarvon became impatient at the luck of results. Lord Carvon told Carter he had Carter he had only one more season of funding to find the tomb of King Tutankhamun.

Carter was under pressure, but he was lucky. 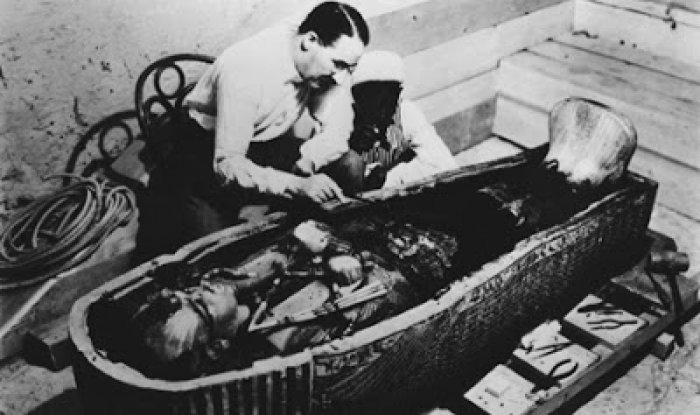 On November 4, 1922, a boy who worked as a water fetcher on the excavation started to dig in the sand with a stick. There, he discovered a stone step and he quickly showed it to Carter.

When Carter and his team examined the site they found ancient steps leading to a sealed door and secret chamber.

On November 26, 1922, Carter and Lord Carnarvon entered the tomb, where they found an immense collection of gold and treasures. Some months later, on February 16, 1923, Carter opened the innermost chamber and found the sarcophagus of King Tutankhamun and this became one of the greatest discoveries in the history of Egypt.