AncientPages.com - Terrace farming was invented in South American Andes over 1,000 years ago.

The Wari' people, also known as the Pakaa Nova, an indigenous people of Brazil, as well as  other peoples of the south-central Andes started to grow potatoes, maize, and other native crops on graduated terrace steps.

This practice was later adopted by the Incas because they lived in the mountains and flat land was rare. The Incas were masters of their harsh climate and they created their own flat land by building steps of land for agriculture down the mountain side. 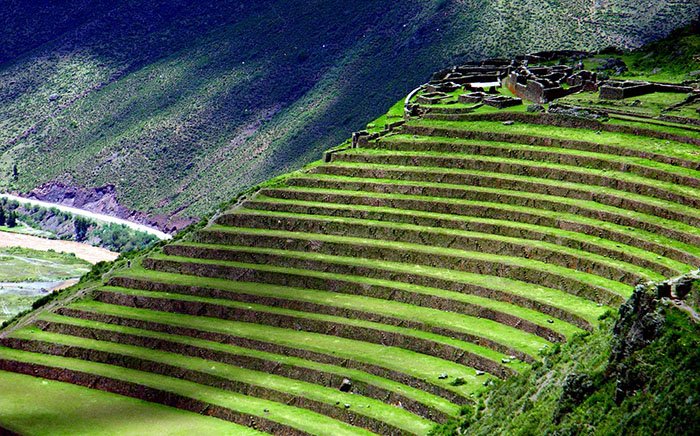 They cut terraces into the hillsides, progressively steeper, from the valleys up the slopes. Instead of rainwater running down the mountain side, the Inca channeled it through each step. They also built aqueducts to carry water where it was needed. At the Incan civilization’s height in the 1400s, the system of terraces covered about a million hectares throughout Peru and fed the vast empire.

There is no doubt the Incas were great farmers, with clever solutions to their farming problems. The Incas grew potatoes, many fruit and vegetables, and coco leaves to make chocolate. The Incas grew so much food that they needed ways to preserve it, and so they dried it out and stored it.

Chinampas: Artificial Islands Created By The Aztecs To Improve Agriculture

The ghost of the Incas’ farming achievements still shadows the Andes. The remnants of ancient terraces appear as lines of green on the mountains. Former irrigation canals carve hollows into the land.

Today, in a corner of the Andes, people are breathing new life into ancient practices. Inspired by recent archaeological research, they are rebuilding terraces and irrigation systems and reclaiming traditional crops and methods of planting.

They do this in part because Incan agricultural techniques are more productive and more efficient in terms of water use. But these modern farmers also believe the Incan ways can offer simple solutions to help protect communities’ food supply in the face of climate change.