Ellen Lloyd - AncientPages.com - The Vikings were the lords of the oceans. One of the main reasons behind Vikings' success to reach distant lands lies in their remarkable longships. The Vikings’ ships were the greatest technical and artistic achievement of the European Dark Ages. Without these great ships, the Viking Age would never have happened. 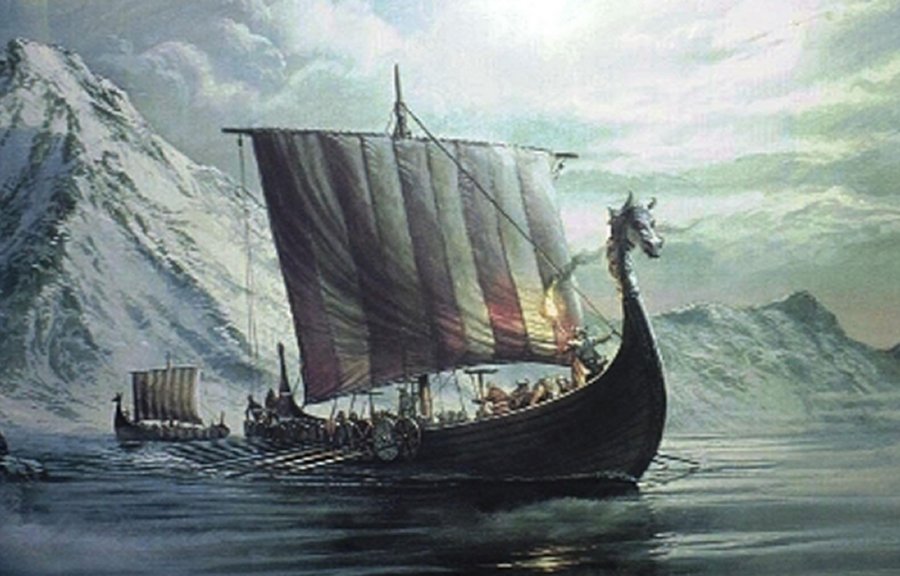 Viking longships were fast and could sail in shallow water. This gave the Vikings the possibility to travel up rivers as well as across the sea. In a raid, a ship could be hauled up on a beach. To surprise your enemy was an important strategic military tactic that gave the Vikings several advantages. The Vikings could jump out and start fighting, and then make a quick getaway if they were chased.

The Gokstad Viking ship in 1880 when it was discovered.

Many Viking ships were equipped with a dragon head on the bow. The dragon was one of the most famous symbols of the Vikings. Vikings believed the dragon could protect them against evil spirits at sea.

Vikings built their ships beside a river or an inlet of the sea. A tall oak tree was cut to make the keel. The hull of the ships was made by overlapping planks and securing them with iron rivets. This made the ships very strong.  A wool string was dipped in tar and forced between the planks to prevent leaks.

To steer the ship, one man worked a big steering oar at the back end, or stern.

A dragonship was usually between 30-50 meters long and could carry 40 and 60 oarsmen. The men slept and ate on deck. There was some space below deck for stores, but no cabins. Two of the most famous Viking Ships, the Gokstad Viking ship and the Oseberg ship, were found by archaeologists in Norway.

Both ships were buried in Viking funerals between AD 800 and 900 and are now in the Viking Ship museum in Oslo, Norway.

It was in a longship that Leif Eriksson landed on the American coast around the year 1000, long before Columbus. Of course, all other famous Viking warriors used longships when they traveled to other countries.

The longships were more or less invincible and gave the Vikings a vital advantage when they went to war or raids.