A. Sutherland - AncientPages.com - For 4500 years, human life was controlled and even manipulated by money. Ever since ancient times, money has played a central role in the people's lives, regardless of whether payment has been rare shells, worthless iron coins, small springs or stamped precious metal pieces. 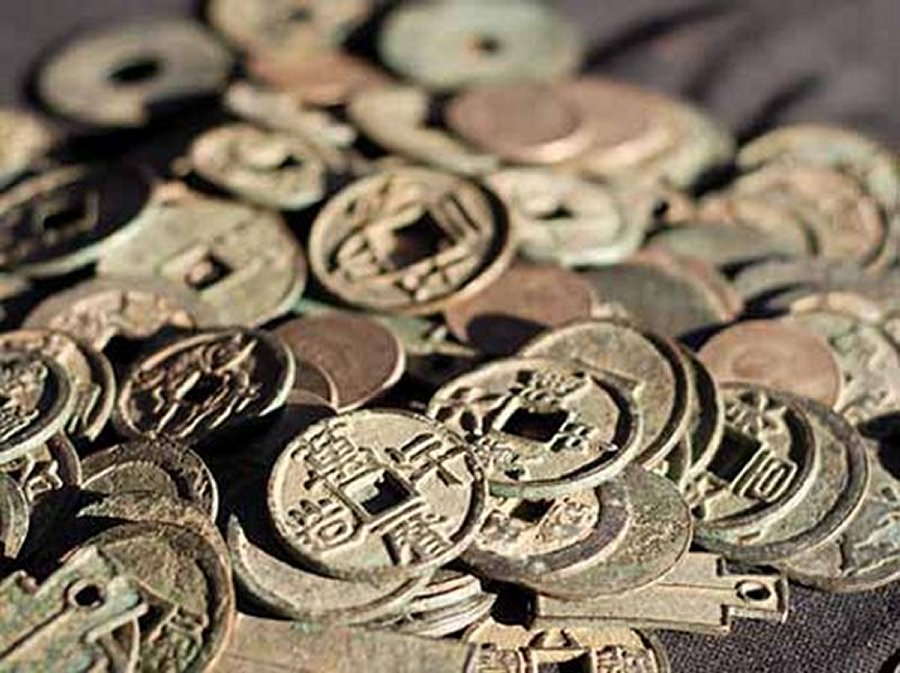 We go back 4500 years in time and find that silver rods were the world's first money. They were introduced in Mesopotamia. It was believed they would smooth the progress of trade.

The origin of money is hidden in the far distant past but for the first time, money is mentioned in writing in Mesopotamia (today: Iraq).

According to ancient cuneiform tablets, pure silver was the first standardized payment. The metal was shaped like rods that were cut off and weighed when a business was ready to be implemented.

Everything indicates that silver was introduced for purely practical reasons. Trade was prevalent in the highly developed Mesopotamia and natural objects were often heavy and unwieldy, so it was much easier to take small silver rods than oxen or cereal. 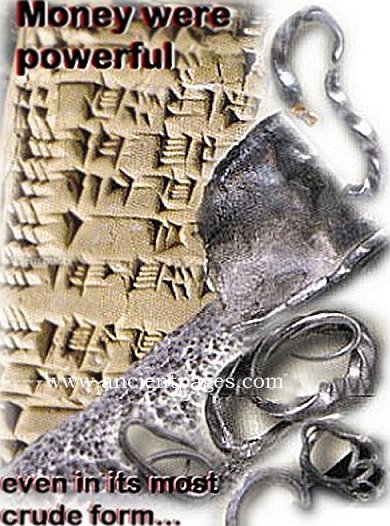 According to historians, cuneiform tablets were invented for easier bookkeeping of the growing number of trade transactions.

For thousands of years China has been using gold and silver and even copper money which were in circulation besides the well known cowrie shells.

Even in those distant times a very "elementary process of minting was in vogue; and the coins were known as the round money, bell-shaped money, and the knife-shaped money." (S.R. Wagel, "Chinese Currency And Banking")

During the early periods of China's history the shells constituted basically the only medium of exchange.

Shells were perfect money for the Chinese people. They were lightweight, durable, countsmall, easy to carry, and impossible to falsify. About 3500 years ago, the Chinese began to use small shells as money.

The extent of shell currency is currently unclear but probably it was very widespread. As the Chinese writing system developed it used the sign of the shell as the symbol for 'money'. Similarly, shells came to be included in characters including such terms like "buy", "sell" and "barter".

However, the Chinese were not the only ones who paid with shells. The shells, very coveted by people living along the Indian Ocean until the 1900s, were used to pay for groceries including food. Similarly as our day currency, also shells can suffer inflation.

In remote regions of Uganda, for example, a wife cost only two shells(!) in the 1700s. When the roads to the sea were improved, many more shells came into circulation and then... the value of the shell currency decreased. 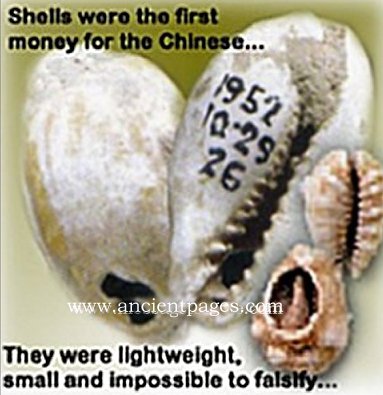 Coins of metal were known in ancient Egypt but was used almost exclusively by rich merchants dealing with foreign partners.

The most common payment among ordinary people was cereal.

A monthly salary of around 200 kg of it, was used in barter trade to obtain other goods.

In order to stimulate trade built up power and network of public cereal banks where the Egyptians could put grain they received or borrow some if necessary.

Bank customers received a receipt for their deposits and loans, they also could take out or pay in other cereal banks. The receipts were also used as payment in trade.

One upon a time, there was an Iron Age kingdom in western Asia Minor known as the Kingdom Of Lydia. 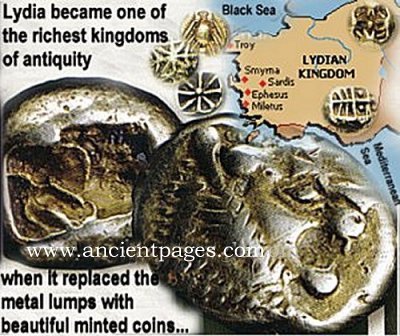 Lydia became one of the richest kingdoms of antiquity when it replaced the metal lumps with with beautiful minted coins.

The Lydian money is called "Adam of coins" because they gave inspiration to later periods of coins in Europe and the Middle East.

"Virtually all coinage in use today is the progeny" of that what the Lydians initiated. (Porteous, "The Nature of Coinage")

Kingdom of Lydia was not larger than a city state but that seemingly insignificant kingdom left behind a legacy that would change history: coins.

There were already various forms of money in Egypt, China and other great ancient kingdoms, but in Lydia, for the first time, it was recognized the importance of a small and manageable payment.

In order to eliminate the great inconveniences of non standardized money, banks and goldsmiths began to convert metal into standard coins. Coins of the same kind were given specified shape, weight and fineness. Circa 640 BC, the Lydian kings were the first to strike coins of standard weight and standard size. And they marked them with their own sigils to ensure metal's authenticity.

Coins revolutionized trade because Lydian merchants no longer needed to devote their precious time to weigh silver and gold pieces, or explore the metal's purity. They simply counted the coins!

Read part 2 of this article

Read part 3 of this article

First version of this article was published on January 26, 2015