AncientPages.com - The stone, a solid pink granite boulder, measures 0.5 x 1.68 x 0.36m and weighs c.670kg. It was incised with odd carvings on two adjoining faces by the Picts who lived in the north and east of Scotland hundreds of years ago.

It is known as the Dandaleith Stone.

Curiously, the stone's two other faces show no obvious signs of carvings. The artifact was accidentally discovered in Craigellachie, Scotland last year by a farmer during the ploughing of a field in May 2013. 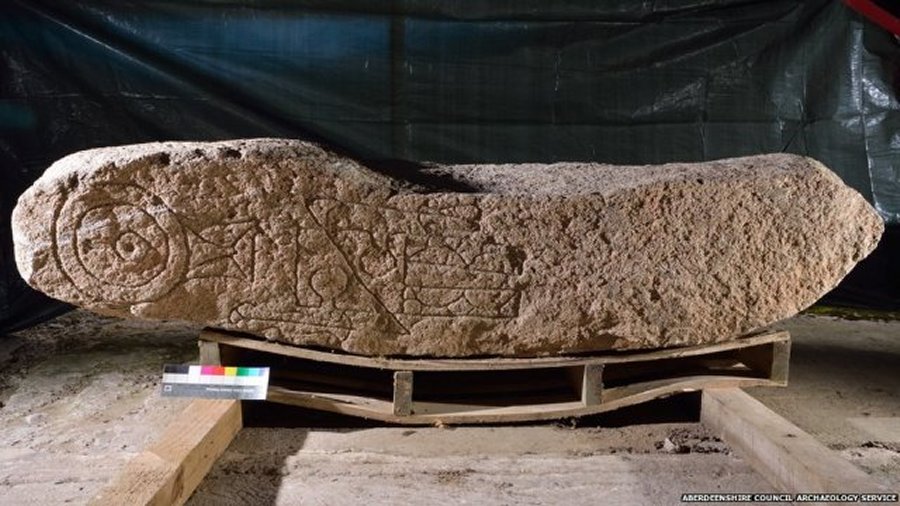 Spanning more than 1.7 meters and weighing more than a ton, the Dandaleith Stone has odd carvings made by the Picts who lived in the north and east of Scotland hundreds of years ago. Credits: Aberdeenshire Council

The stone dates from the 6th to 8th Centuries and contains several undeciphered signs.

Archaeologists have been unwilling to release much information about this unique stone due to its sensitivities around the location as well as the issue of having to work out how to remove a stone of its size. The precise location where the stone was found remains secret to allow archaeologists to investigate the site for further artifacts.

The Picts were first mentioned by the Romans in in AD 297. In AD 368 a Roman historian named Ammianus Marcellinus noted that ‘the Picts, divided into two tribes called Dicalydones and Verturiones… are roving at large and causing great devastation…’

The Dandaleith Stone may be unique in having two pairs of symbols carved on the same orientation on two adjoining faces. Similar symbols can be found on other Pictish stones in the Strathspey valley, as at Arndilly and Inveravon. Credits: Aberdeenshire Council

The Picts were mysterious people. Many historians have said that the Picts were the 'painted people'; they may have decorated and tattooed their faces and bodies with dyes.  A Latin word 'Picti' ('to paint') may be related to the Picts..

The Irish called the Picts the 'Cruithne'. The Romans used 'Picts' as a general term that covered many separate tribes. It is believed that the Picts created stones as markers or commemorations between the 6th and 8th centuries.

Face 1 of the large Dandaleith Stone features a large eagle, crescent and V-rod.   Face 2 is incised with a mirror case symbol, notch rectangle and Z-rod below - typical of stones found in the area, but potentially unique in being aligned on two adjoining faces. 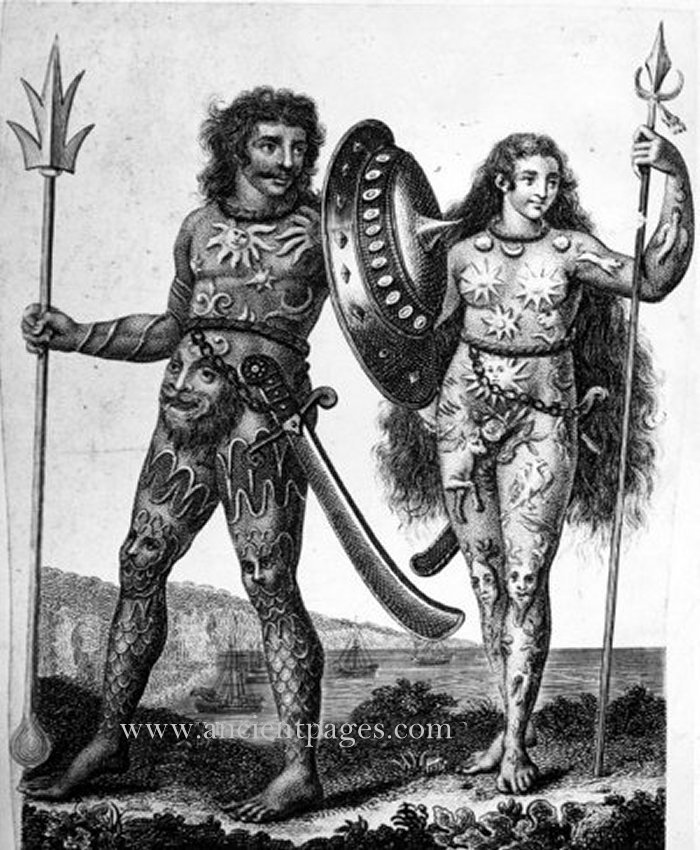 Generations of historians have questioned why the Picts seemed to disappear from history after fighting the Romans and Vikings.

"Members of the public regularly contact the Archaeology Service about artifacts they have found, but the reporting of the Dandaleith Stone was something truly unexpected - a real rarity," said Claire Herbert, the council's Regional Archaeologist, adding that the artifact is remarkable and very unique.

Experts believe the artifact mey help to understand other Pictishsymbols on stone.

Examination of the stone is conducted in Edinburgh and the experts hope to decipher the Pictish symbols. There is a distinct possibility that the Dandaleith Stone will be put on display at Elgin Museum, Scotland's oldest independent museum.

The presence of two sets of symbols on a single stone is itself a very unusual feature relative to the corpus of symbol-bearing stones," said David V Clarke, an Early Medieval specialist and former Keeper of Archaeology at the National Museum of Scotland.

Archaeologists are not sure at this stage if the stone was found at its original location and the meaning of the symbols is still unclear, but with a bit of luck scientists may unlock the secrets of the Dandaleith Stone in the near future.