AncientPages.com - An international team of researchers used cutting edge genome technology to solve a mystery that has puzzled archaeologists for more than a decade.

Did the skeletons belong to gladiators, soldiers or perhaps criminals?

Analyzed set of Roman-age decapitated bodies, found by York Archaeological Trust (YAT) at Driffield Terrace in the city, revealed that a Middle Eastern body was present alongside native Europeans.

Several suffered perimortem decapitation and were all of a similar age – under 45 years old.  Their skulls were buried with the body, although not positioned consistently – some were on the chest, some within the legs, and others at the feet. 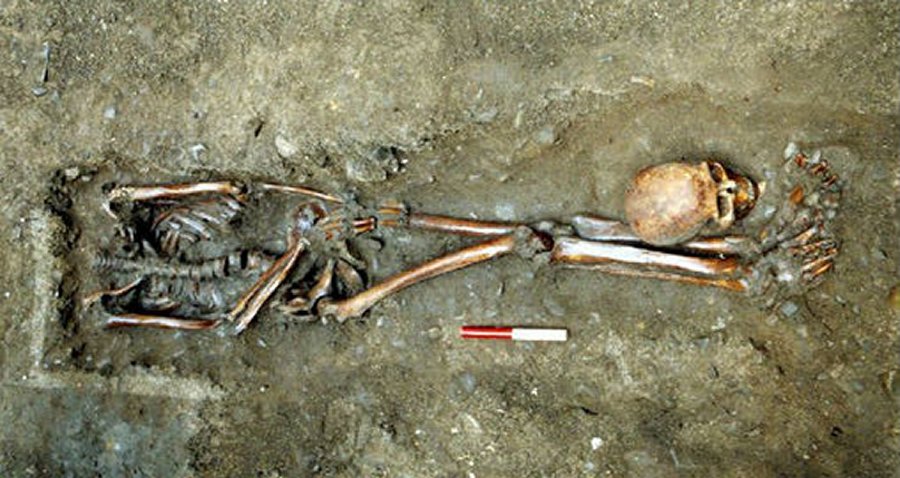 Examining the skeletons also revealed much about their lives – including childhood deprivation and injuries consistent with battle trauma.

The researchers also studied a male skeleton from a Christian Anglo-Saxon cemetery in the village of Norton, Teesside, which was found to have genes more closely aligned to modern East Anglia and Dutch individuals highlighting the impact of later migrations on the genetic makeup of the earlier Roman British inhabitants.

One of the decapitated Romans had a markedly different story, however.  Of Middle Eastern origin, he grew up in the region of modern day Palestine, Jordan or Syria before migrating to the British Isles and meeting his death in York.

The Roman burial samples were all male, under 45 years old and most had evidence of decapitation. They were taller than average for Roman Britain and displayed evidence of significant trauma potentially related to interpersonal violence. All but one would have had brown eyes and black or brown hair but one had distinctive blue eyes and blond hair similar to the single Anglo-Saxon individual.

The demographic profile of the York skeletons resembles the population structure in a Roman burial ground believed to be for gladiators at Ephesus.  But the evidence could also fit with a military context -- the Roman army had a minimum recruitment height and fallen soldiers would match the age profile of the York cemetery.

“Whichever the identity of the enigmatic headless Romans from York, our sample of the genomes of seven of them, when combined with isotopic evidence, indicate six to be of British origin and one to have origins in the Middle East. It confirms the cosmopolitan character of the Roman Empire even at its most northerly extent," Professor Matthew Collins, of the BioArCh research facility in the Department of Archaeology at York, said.

“This is the first refined genomic evidence for far-reaching ancient mobility and also the first snapshot of British genomes in the early centuries AD, indicating continuity with an Iron Age sample before the migrations of the Anglo-Saxon period.”

The research is published in Nature Communications.