A. Sutherland - AncientPages.com - The vast Indus Valley Civilization had technologically advanced Bronze Age cities that once flourished from northern India and Pakistan to Iran, and surrounded the river systems that fed the fertile Indus Valley.

It was a large, impressive and complex civilization and the peak of Indus Valley (also known as Harappan) civilization ranged from about 2600 BC to 2000 BC. 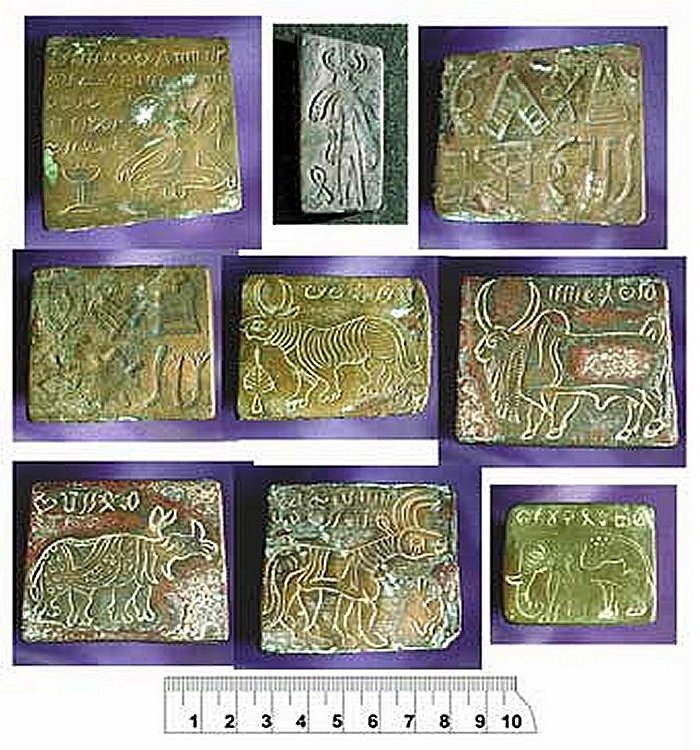 A group of nine Indus Valley copper plates  (c. 2600–2000 BC), discovered in a private collection in Pakistan, represent a new and not previously described artifacts from the region and are worth studying. They appear to be the sole surviving members of a set of a unique type of copper plate not seen before among Indus Valley (Harappan) artifacts. 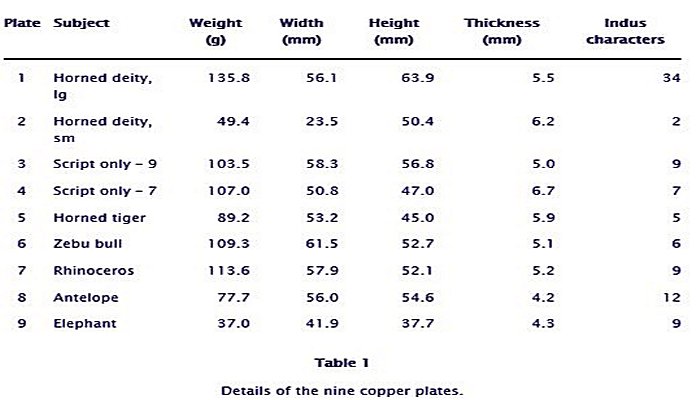 Image courtesy of Harappa Archaeological Research Project/Harappa.com and Dept. of Archaeology and Museums, Govt. of Pakistan.

The plates could potentially date the advent of printing to more than 1500 years before what is commonly believed to be the first known printing, in China around 700 BCE.

Will the curious ancient copper plates help unravel the mystery of Indus script?

They are significantly larger and more robust than those comprising the corpus of known copper plates or tablets, and most significantly differ in being inscribed with mirrored characters. 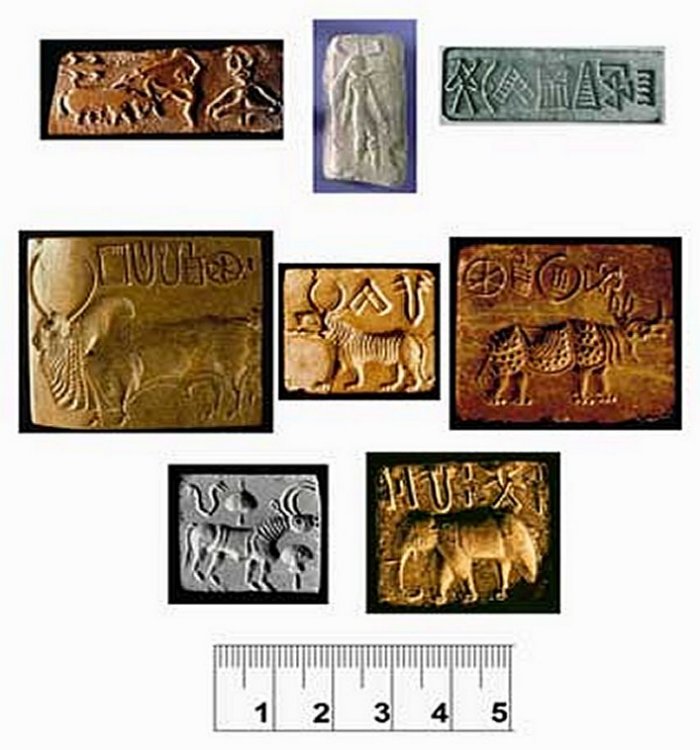 Images of seals and tablets (to scale) similar to the copper plates (brackets). Images courtesy of Harappa Archaeological Research Project/Harappa.com and Dept. of Archaeology and Museums, Govt. of Pakistan.

One of the plates bears 34 characters, which is the longest known single Indus script inscription.

A thorough examination of the plates showed that these copper plates - probably not used as a seal but rather in copper plate printing - are by far the earliest known printing devices, being at least 4000 years old.
Dr. Rick Willis, a former senior lecturer in Botany, associated with the University of Melbourne, purchased a set of nine unusual copper plates, each no larger than a credit card, from the Indus valley.

Vasant Shinde and Rick Willis have reported a remarkable discovery of nine copper plates and described the artifacts.

“I compared these to other artifacts like clay seals of the Indus Valley era, and the images and scripts were very similar. Indus script remains as one of the world’s few well-documented languages that have defied being deciphered.  Scholars generally accept that the script and images on seals are not related, but I believe the copper plates are quite different and were possibly meant to produce instructive images. 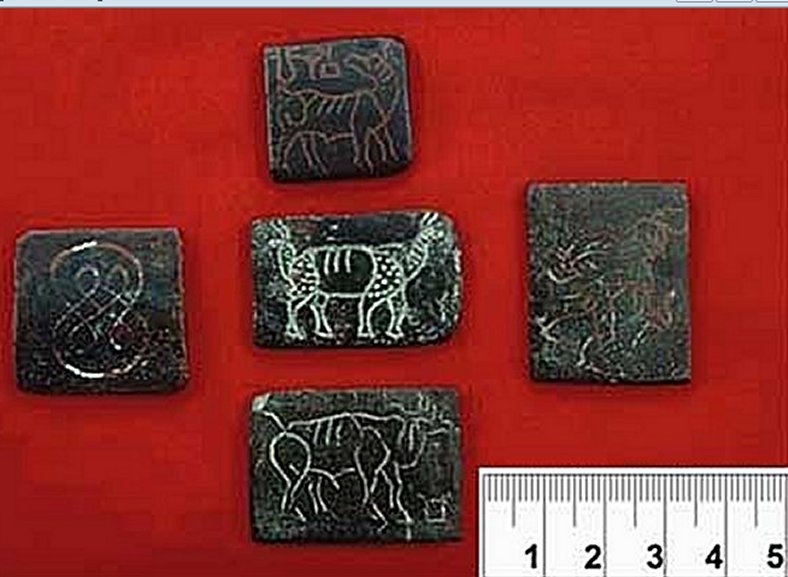 One of the copper plates has the longest known inscription in Indus script, twice as long as any other known.

“The plates have all the attributes of printing plates: fine engraving and reversed writing. It became clear to me that copper plates are the earliest printed form of art, possibly printed on silk, leather or bark at the time, as the paper did not exist then. We have actually produced quite acceptable images onto native silk cloth..."

"They are quite different from the corpus of other metal plates or tablets recovered from Mohenjo-daro and Harappa, as they are larger and much thicker, but most significantly they bear inscription only on one surface and the script is reversed. Data from all tests, including x-ray fluorescence metal analyses, conventional and scanning electron microscopy, and metallographic analysis are totally consistent with metal artifacts from Indus Valley (Harappan) civilization, c. 2600–2000 BC.

Similarly, the iconography and script relate well to other Indus Valley artifacts, such as seals, made from steatite or terracotta." 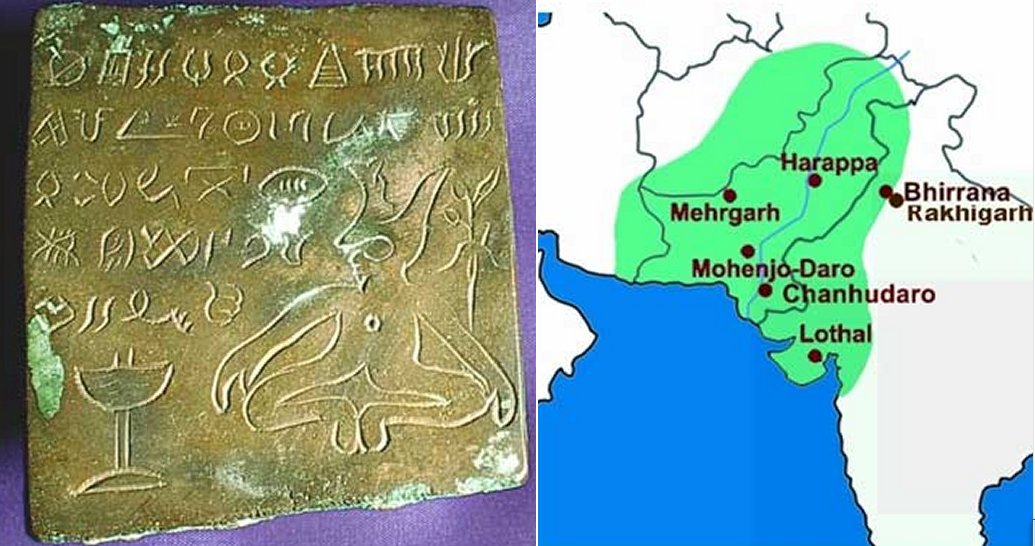 The original source of the copper plates remains unknown but it is assumed to be either Mohenjo-daro or Harappa, based on iconographic similarities to known copper tablets and steatite or terracotta seals.
The copper plates are highly significant for two principal reasons.

Firstly, they bear inscriptions in Indus script, a language that still remains essentially undeciphered, and one plate, in particular, bears the longest known single inscription in Indus characters.

It is possible that the text on the copper plates described here relates directly to the images, and may thus present a unique tool to progress the epigraphic analysis of Indus script. 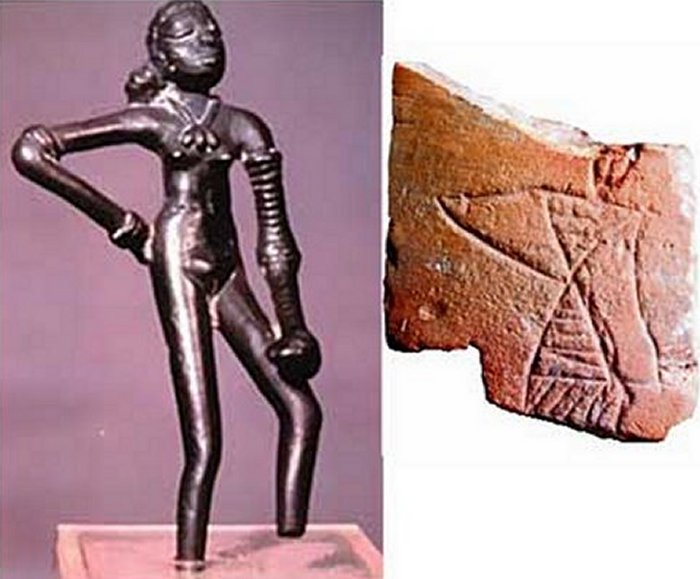 The Dancing Girl, a small bronze statue found at Mohenjo-daro, now in The Louvre, Paris, and a pottery sherd from Bhirrana, India.

The copper plates are not identifiable with any particular Indus site, based on style. The best matching imagery originates from disparate sites, including Mohenjo-daro, Harappa, and Chanhudaro, but there is no reason to attach any great meaning to this as other relevant seals likely remain undiscovered, and seals may have been distributed over substantial distances.

A good example of geographical distance between clearly related objects is the famous bronze “Dancing Girl” found at Mohenjo-daro, and a sherd of pottery, found at Bhirrana, Haryana, India (about 600 km distant), showing a very similar profile.

Ancient Asia - Journal of the Society of the South Asian Archaeology