Ancient Pages.com  - On the morning of 2 September 31 BC,  the fleets of Roman Mark Antony and Cleopatra, queen of Egypt met the fleet of Octavian leader just outside the Gulf of Actium in Greece.

Antony's ships were built mainly for ramming and sinking opponent's vessels. They were large but seriously undermanned due to a malaria outbreak which had struck his crews.

Before their forces suffered final defeat, Antony and Cleopatra broke though the enemy lines and fled to Egypt, where they would commit suicide the following year. 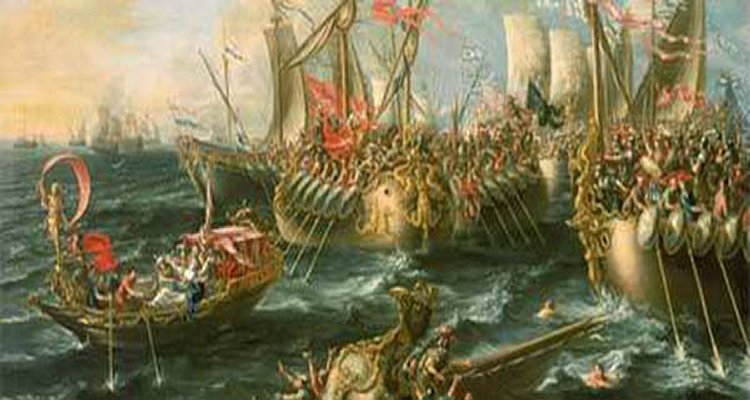 Octavian's ships, on the other hand, were smaller and fully manned with healthy crews so the fleet pf Octavian could  draw Antony's fleet out and soon Antony was unavoidably engaged in this military confrontation.

The battle was unsuccessful for Antony. Cleopatra, with her sixty ships, raised sail and left the battle for the open ocean. Antony immediately left his command ship and followed Cleopatra with forty of his own ships, leaving some 5,000 men and 300 ships to be destroyed by Octavian.

Why Cleopatra and then Antony, left the battle has always been debated.

According to some historians, Antony lost his nerve when he saw Cleopatra leaving the fight while others claim their action was a pre-planned escape should the battle go toward Octavian's side. Whatever the reason was, the result was complete victory for Octavian.

Defeat followed on defeat for Antony and, the following August, he committed suicide by stabbing himself, dying in Cleopatra's arms, and she, then, allowed herself to be bitten by a poisonous asp preferring death to humiliation by Octavian.

Later that year Octavian executed Cleopatra’s son, Caesarion and annexed Egypt into the Roman Empire. Cleopatra’s treasure were to pay off his veterans.

About three years after the battle, Augustus Caesar declared himself Emperor. He ruled a peaceful, prosperous, and expanding Roman Empire until his death in 14 A.D. at the age of 75.

The Roman Empire was born.

R. A. Gurval, Actium and Augustus: The Politics and Emotions of Civil War