A. Sutherland - AncientPages.com - Named after the healing god Asclepius, the Asclepion of Pergamum is a sacred site that existed as early as the 4th century BC.

According to the Greek myths, Asclepius learnt the art of healing from both his father Apollo and the centaur Cheiron. In time, he became so skilled in surgery and the use of drugs that he was revered as the founder of medicine. A major sanctuary was dedicated to him at Epidaurus, the place where he was born. 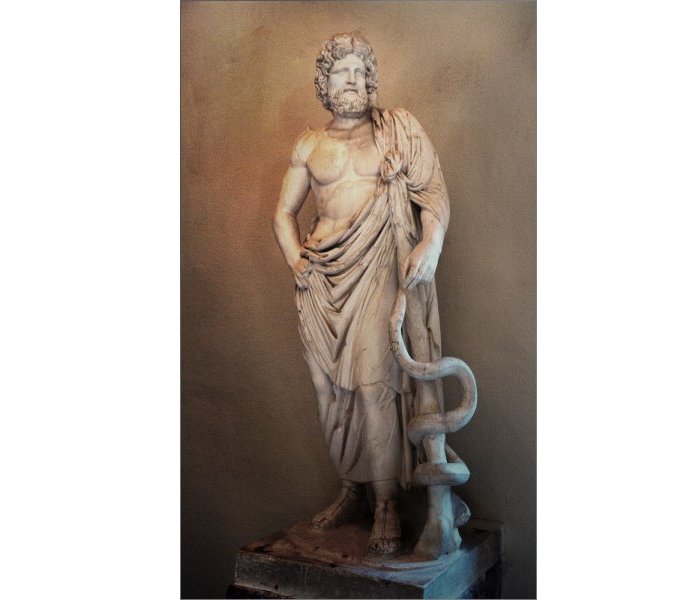 Asclepius with his serpent-entwined staff.

In time, Asclepion of Pergamum became one of the most famous ancient healing centers and the world's first psychiatric hospitals.

Located in Bergama, a city in Aegean Turkey, known for its interesting archaeological ruins from the ancient Roman city of Pergamon this ancient place is still beautiful and well-worth a visit.

Unlike today's modern hospitals, people were more than eager to get to the Asclepion.

Asclepion (Asklepieion) was a mixture between a sanctuary and a modern spa. It had facilities where the sick could relax and enjoy themselves such as a library and a small theater.

Practiced therapy was based on both psychological and physical treatments.

Patients enjoyed mud baths, music concerts, and were given doses of water from the sacred fountain. Later it was discovered that this sacred source of water had radioactive properties.

Hours of therapy also probed the meaning of the previous night's dreams, as patients believed dreams recounted a visit by the god Asclepios, who held the key to curing illness.

Inside the temple there was an underground passage. Patients went down a short flight of steps into a tunnel. Cubicles were located at the sides of the passage. Here, patients spent the night there to then tell their dreams to the priests/doctors to facilitate the diagnosis of their disease. In the morning the patients ascended to the temple which had a circular shape so that they could walk in a never-ending procession.

Many ancient cultures believed in the power of dreams, not only ancient Egyptians.

Altar and sacred bath at the Asclepion.

It was believed that Asclepios had the power to rise from the dead and he himself was brought back to life by the great god Zeus. This was the reason why he was thought to have also a snake form and tame snakes were kept in his temples as this animal was regarded as a symbol of regeneration.

Today, the Temple to Asclepius is almost entirely lost with the exception of an altar fragment decorated with snakes.

Temple of Telesphorus. An undergound passage leds to the place where people spent the night.

The Serpent People played a significant role in the lives of the ancients and many gods were depicted either as snakes or surrounded with snakes.

Why Is A Snake Symbol Of Medicine And Pharmacies?

It was not possible for all people to visit the Asclepion of Pergamum. There were strict requirements about who could enter: no one who was near death could come here. It was very important that the Asclepion must not lose its reputation as a place where people were cured. This was a place of health, not death.

During the Roman period, Asclepion was a famous and prestigious place and reached its peak in the 2nd century AD.